The Netflix series, Bridgerton, has turned the world on its head with its romantic Regency settings, and you can visit them on a fabulous England vacation. Chosen by the American Film Institute as the 2021 Top Television Program, Bridgerton gives us a look inside this fictional family, beginning with London’s social season when the marriageable young of English gentry and nobility are launched into society.

The second season of Bridgerton aired on March of 2022, and it was the most-watched television series on the planet. It’s no wonder that they’ve already been re-upped for Seasons 3 and 4. During the period of this Regency series, we’re pulled into the eight, close-knit Bridgerton brothers and sisters as they navigate, manipulate, and thrive in London’s high society. Based on Julia Quinn’s bestselling series, the show’s creator says it’s a mix of fantasy and history, suggesting we simply enjoy the marriage of the two elements. We do.

Here’s good news: It is filmed mostly in London, Bath, family estates, and luscious parks around England, York, and Chatham. You can visit most of the top film locations of Bridgerton, and each is a delight.

When you visit Bath, you must go to the Royal Crescent. This is a sumptuously curved row of 30 terraced homes built between 1767 and 1774. You will recognize it instantly from the series; it is unique and used in a number of episodes. Listed as a Grade I building, this is Georgian architecture at its finest. Picture 114 columns that are 45 feet high! 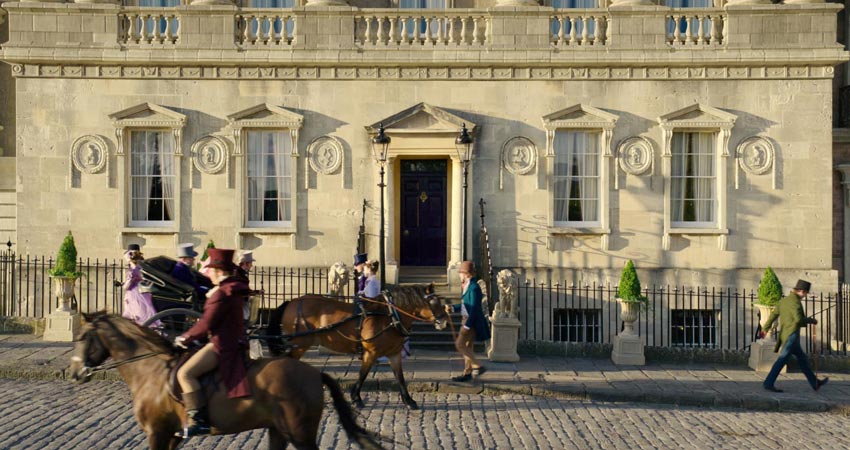 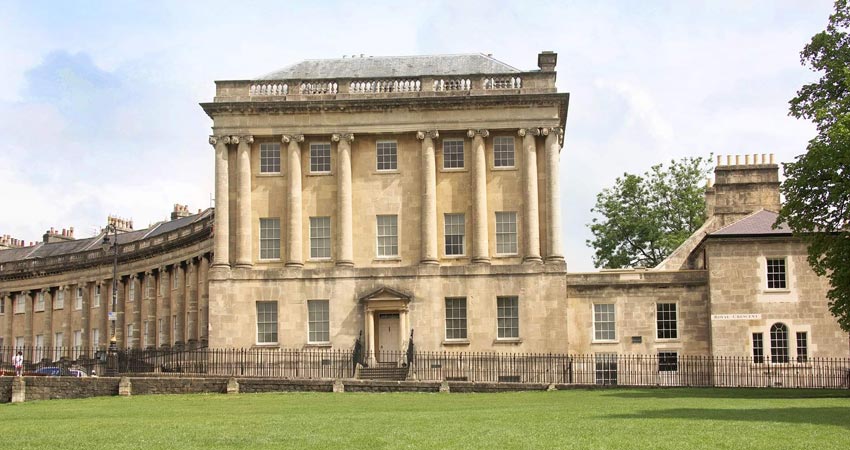 Go to No 1 Royal Crescent, and you’ll find a museum that takes you inside the life of Bath aristocracy during the 18th century—it was used to film the Featherington family residence. These buildings were designed to give the feeling of being in the country, while living in the city, by making the buildings face out toward the gardens. Visiting is a must while in Bath, and entry is free. 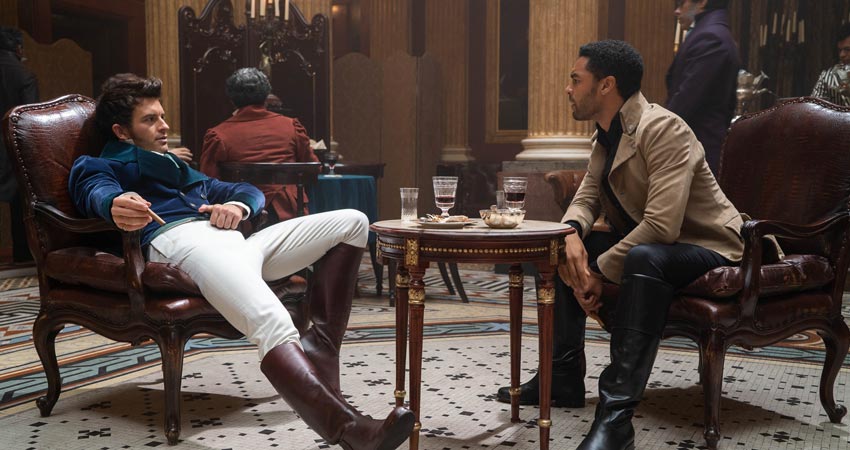 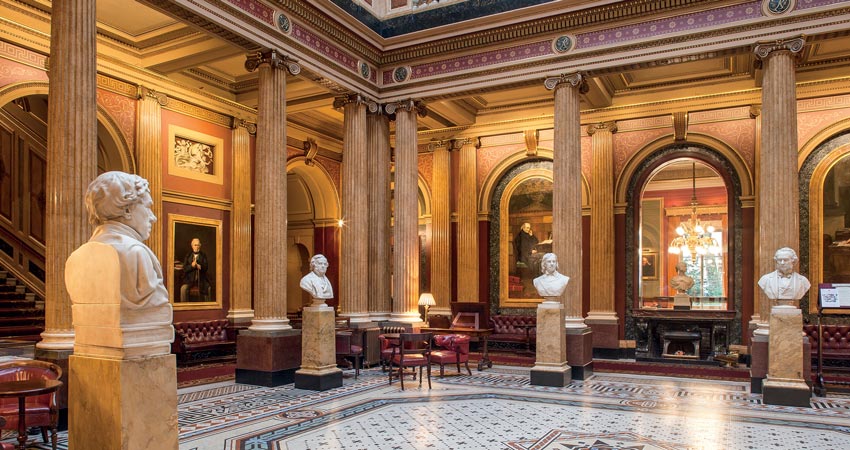 Back in London, we have The Gentleman’s Club. Everybody who was anybody had a club where they could smoke cigars, wear their finest, and talk business without appearing to be crass. Many Bridgerton scenes take place at the Gentleman’s Club; the actual filming was done at Pall Mall’s The Reform Club and in Lancaster House. (Lancaster House is owned by the Government.) It is no surprise that Winston Churchill himself is said to have given himself a break at the Reform Club. We assume he also hoisted back a whiskey or three while there.

The club was all-male, but it began admitting women in 1981. You cannot visit The Reform Club. It is strictly private, and open for members only. Gentlemen’s Clubs have made a resurgence in the United States, and elsewhere, but nothing could compare to the real deal.

Outside The Bridgertons’ House 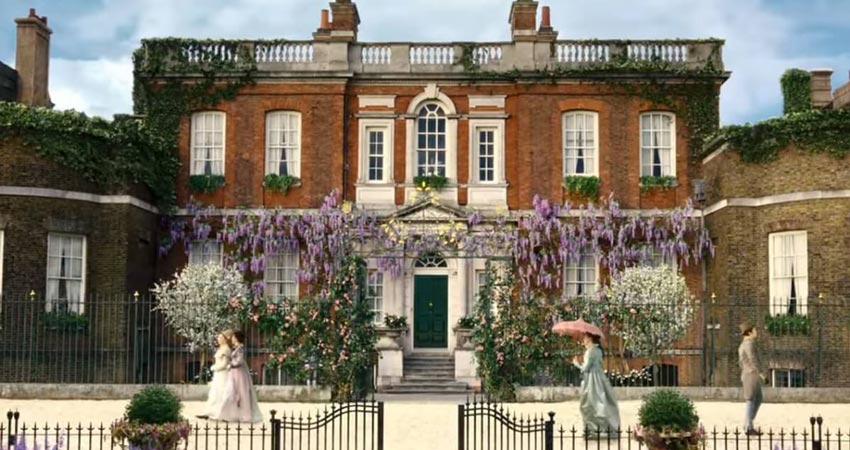 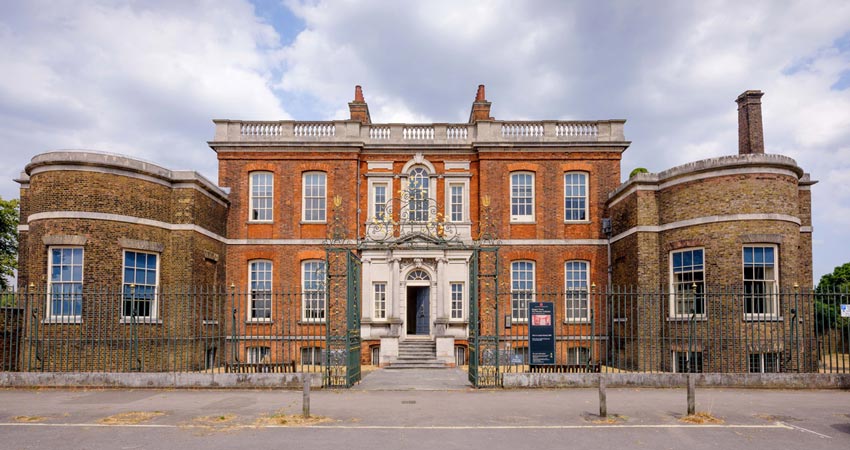 The exterior scenes of the Bridgerton family home are shot outside a lavish Georgian mansion, called the Ranger’s House. On the outskirts of London’s Greenwich Park, this elegant estate was built in 1723. It went through many different owners, some repairs, and it became home to the Wernher Collection in 2002. This is a group of 700 fabulous pieces of art that were gathered over time by the 19th century business tycoon, Sir Julius Wernher. You are welcome to enter the home-turned-museum.

This neighborhood has some lovely shops, cafes, and markets. Take your time and explore.

Inside The Bridgertons’ House 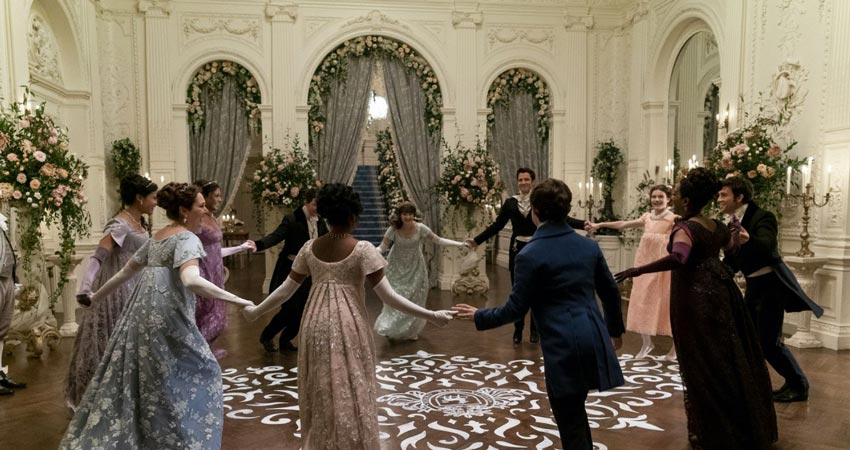 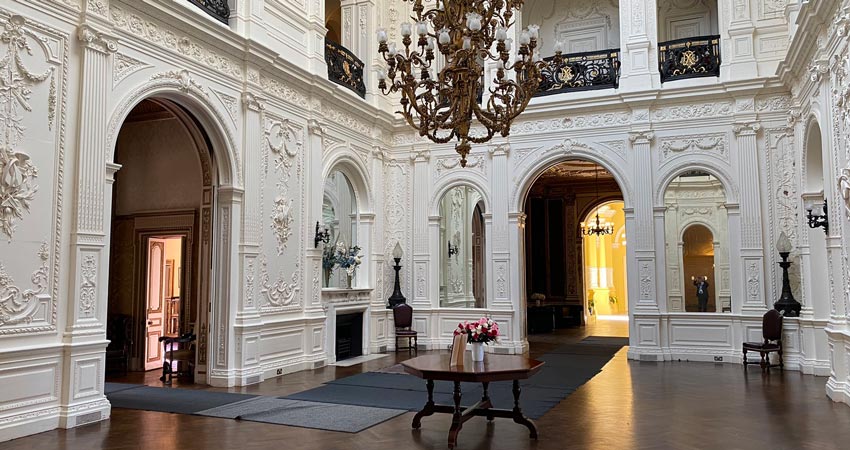 The interior of the family home was filmed at Buckinghamshire’s Halton House, and it is known for its curvaceous staircase. The Halton House is a country home in the Chiltern Hills. Built for Alfred Rothschild in 1880, it is on England’s National Heritage List. Halton House has a long, illustrious history. There has been a manor house on this spot since the Norman Conquest, and at that time it belonged to the Archbishop of Canterbury. In 1720, it was sold to Sir Francis Dashwood, and their family owned it for 150 years. This is rarely open to the public. There are occasional party’s here, with plenty of swells in attendance.

The Duke of Hastings’ House 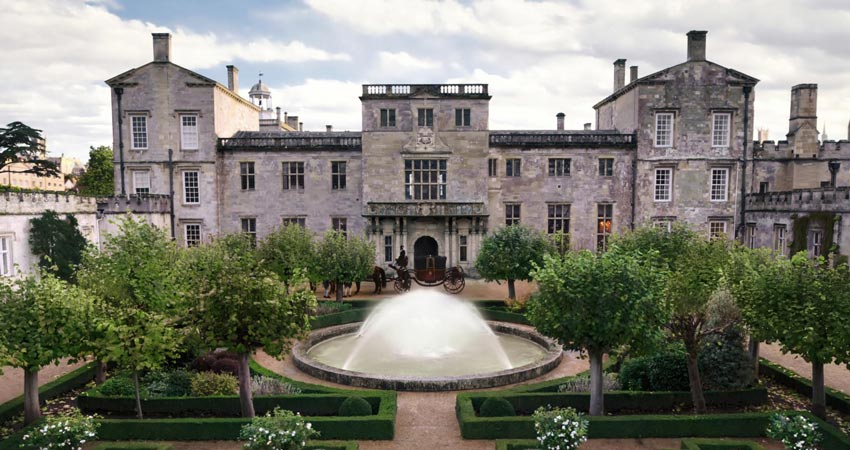 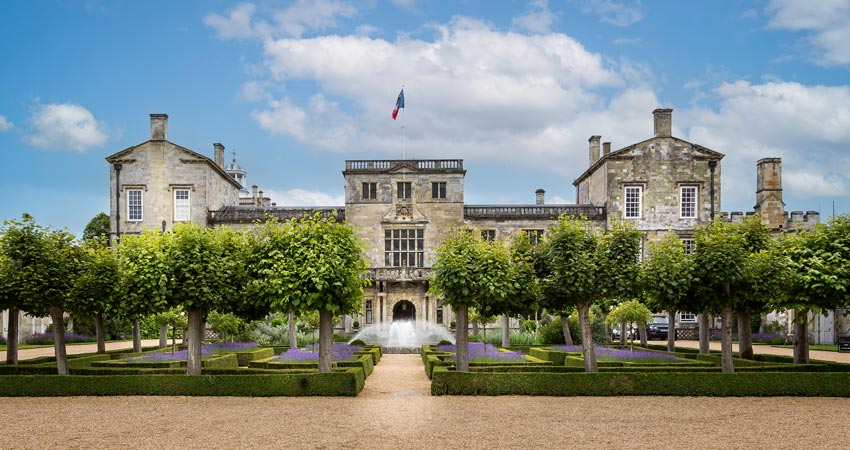 The Duke of Hastings House is, in reality, Wilton House. Built in 1544, Wilton House is located in medieval Salisbury. Both the house and land were a gift to Sir William Herbert from King Henry VIII. Astonishingly enough, the house has remained in the same family, the Pembroke’s, for 478 years. This gorgeous country home was used in four different Bridgerton episodes, standing in for various rooms and salons. This puts Wilton heads above other locales. (It has also starred in Emma, The Crown, Pride and Prejudice.) 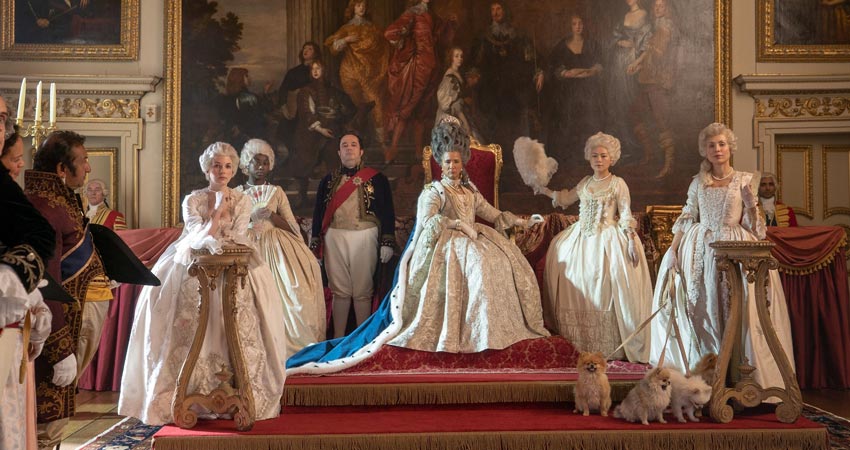 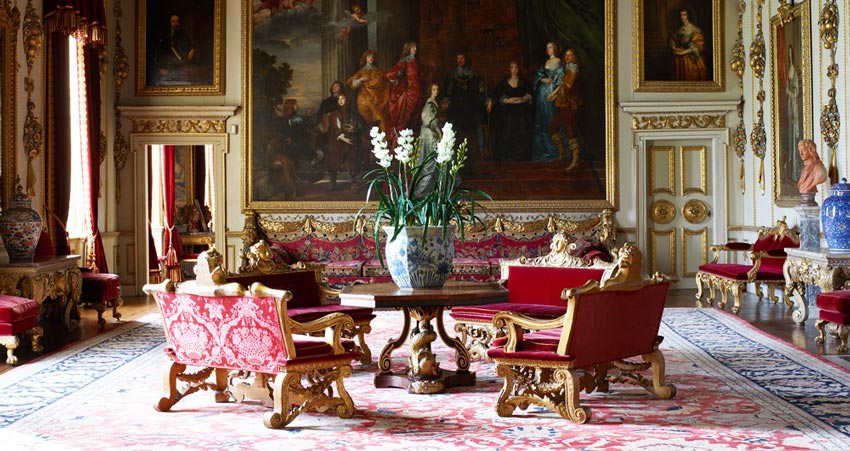 The real Queen Charlotte lived at Buckingham House, and few places exist that can pass for a queen’s abode. But the interior of Wilton House fits the bill. Specifically, it is Queen Charlotte’s royal residence (her bedroom, presentation chamber, parlor, and garden.) It is also the residence of the Duke of Hastings, Lady Danbury, and the Duke and Duchess of Hastings. It is Lady Danbury’s library, the dining room of Clyvedon Castle, the site of a garden party, and the Duke of Hastings’ house exterior, corridors, and his study. Because the house is over 400 years old, and has been refurbished in fits and starts, it is a treasure chest of various film locations for a slew of different characters.

Can you visit the Wilton house? Yes, you can! The Wilton House Museum is open to the public Wednesday through Sunday.

Lancaster House and Syon House in London were also used as decor for the Queen’s palace parlour, hallway, bath chamber and dining room. 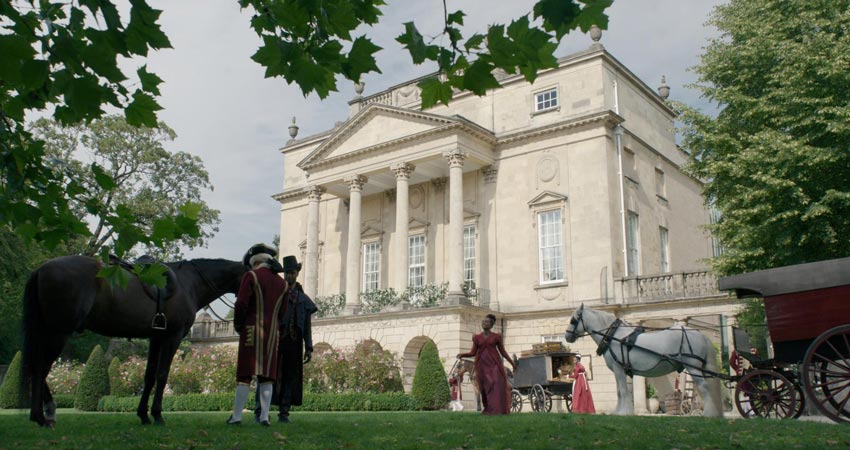 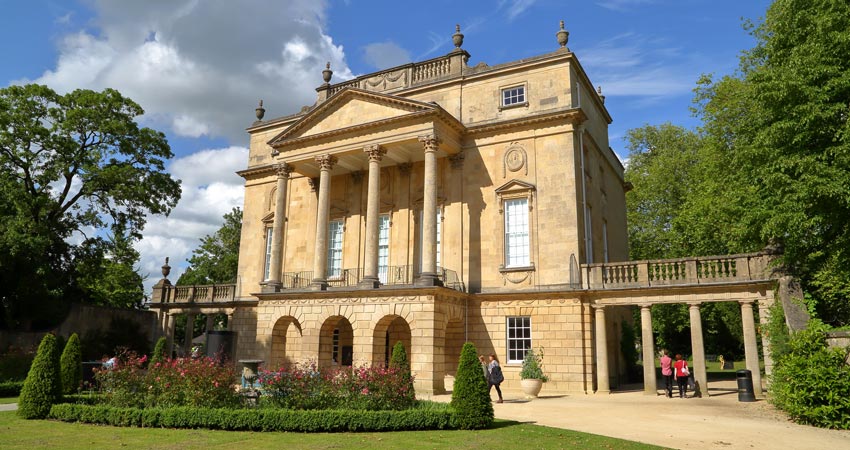 Reality | The Holburne Museum in Bath

Do you remember the scene when Queen Charlotte chooses Daphne as the star debutante, in the first episode of season one? This was filmed at The Holburne Museum in Bath, Somerset, England. You’ve also seen carriages arriving and departing in what is portrayed as Lady Danbury’s Estate.

The Holburne Museum is a Grade 1 building, and it was Bath’s first public art gallery. The collections in this museum belonged to Sir William Holburne, who lived from 1793 – 1874. This Georgian beauty was designed and built in 1799, during the era of George III. And, yes, this is another Bridgerton location that you can visit. It is in Sydney Gardens, a public park.

While there, you can go to the gardens behind the museum and enjoy the café. Feel like Regency royalty as you stroll through the gardens. For those who are into this era, it is a particular joy. 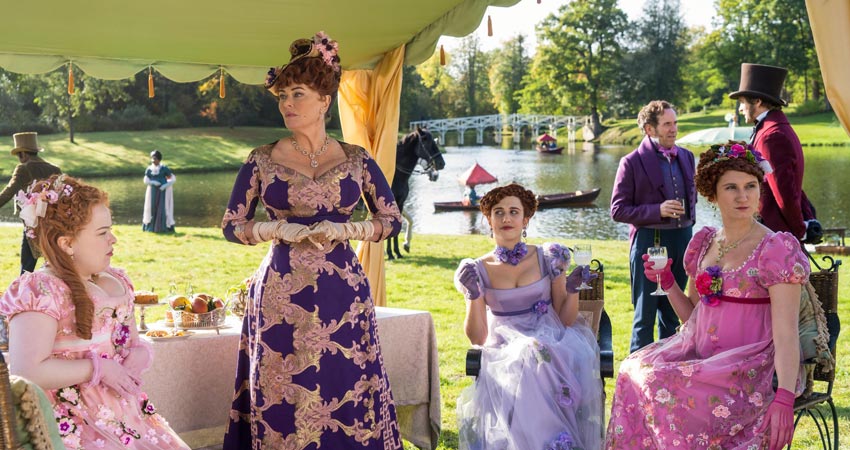 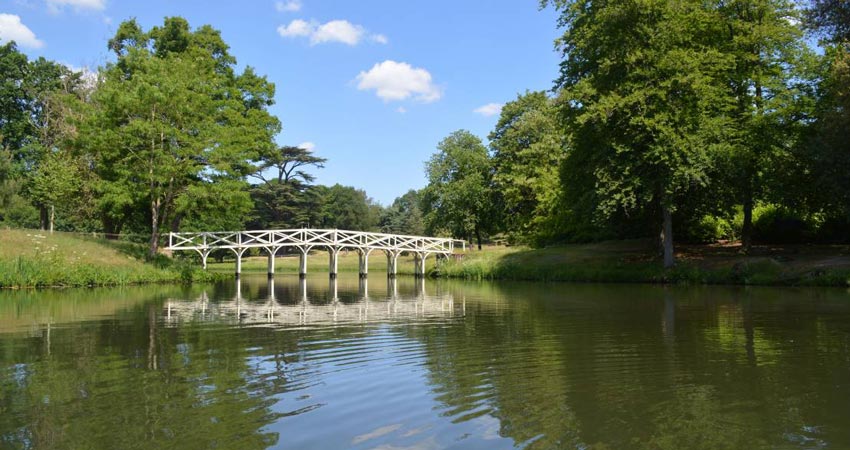 In reality, this park is named Painshill and there is absolutely nothing like it. In Cobham, Surrey, it was designed in the 18th century by Charles Hamilton. His intention was to create a living painting. Painshill (it’s clear why they changed the name for the television series) is considered to be the utmost example of the ideal English garden. It has been called “Britain’s greatest contribution to the visual arts.”

This romantic landscape, which feels like walking into a painting by Monet, is fully accessible. Enjoy every moment of your visit. (For those who love to get their hands into the soil, there are gardening opportunities at Painshill.) This is the extraordinary garden we see in Bridgerton where well-heeled socialites share the latest gossip. 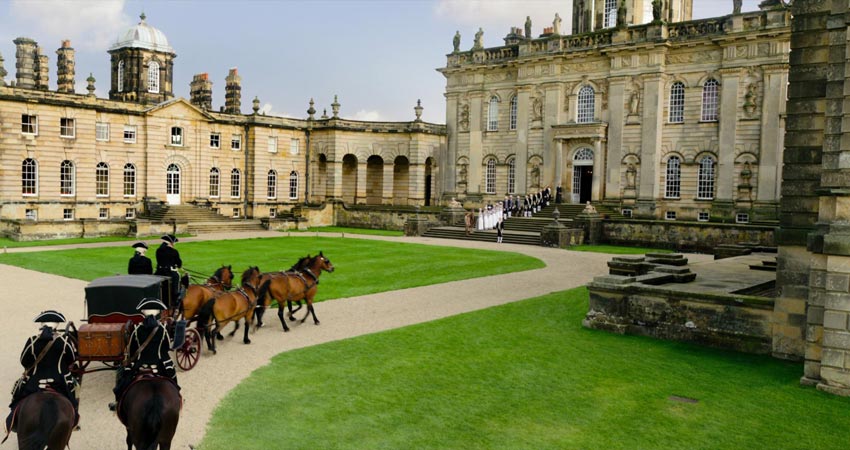 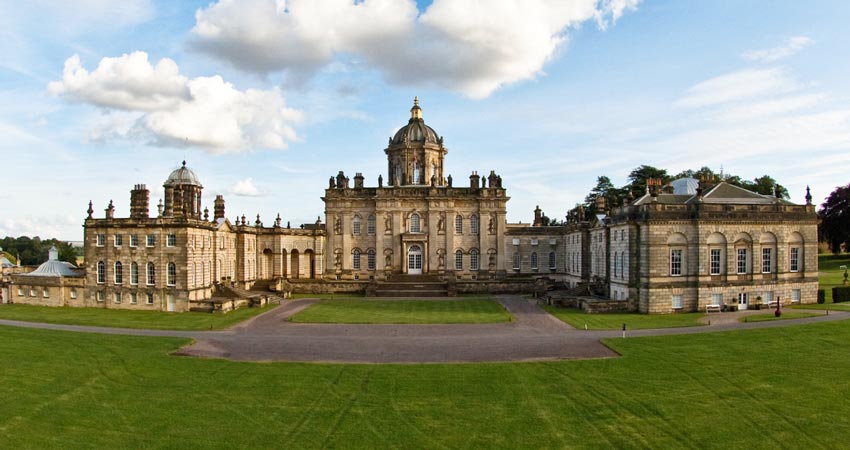 Castle Howard, in Yorkshire, aka Clyvedon Estate, is simply beyond words. It is portrayed as the Duke’s country estate—the place where Simon and Daphne spend their honeymoon. Named by the Telegraph as “One of the Top Ten Buildings You Must See in Your Lifetime,” it took more than 100 years to construct, and at one time it was larger than the Queen’s residence.

“Nobody… had informed me that I should at one view see a palace, a town, a fortified city, temples on high places, woods worthy of being each a metropolis of the Druids, vales connected to hills by other woods, the noblest lawn in the world fenced by half the horizon, and a mausoleum that would tempt one to be buried alive; in short I have seen gigantic places before, but never a sublime one.”  Horace Walpole, 1772

For generations, the Howard family has welcomed visitors to Castle Howard. Visit, and you’ll experience the authentic Clyvedon Estate of Bridgerton fame.

And last, but certainly not least, is The Modiste 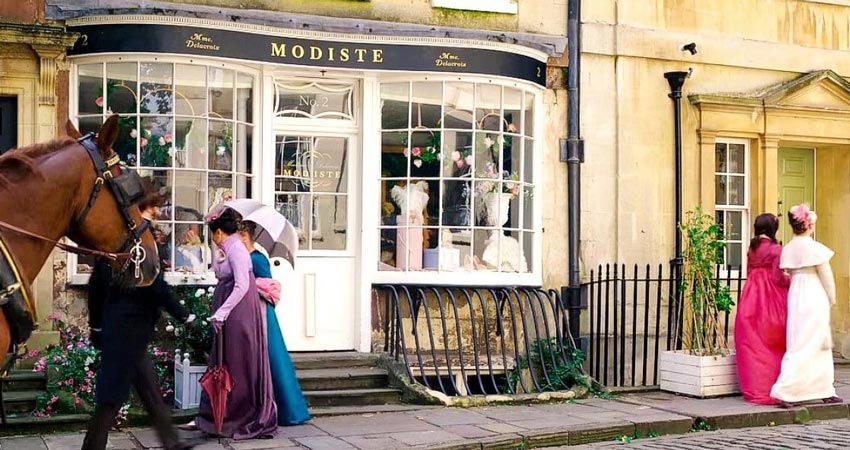 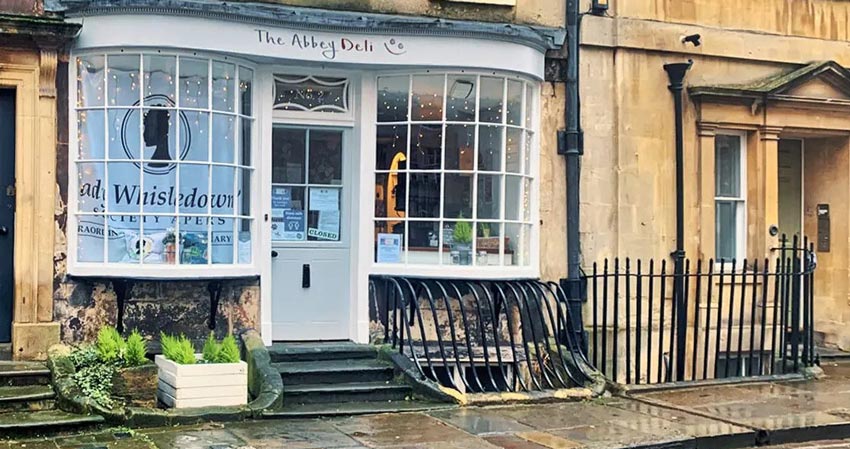 On Bridgerton, we know the Modiste as Madame Delacroix’s dress shop, the place to hear the latest news. In reality, this small shop, in the heart of Bath, at Number 2 Abbey Street, is the Abbey Deli. Stop in for the ultimate cream tea experience. There is a large dining area, and small nooks for privacy. Enjoy every delicious moment at the Abbey Deli!

It is difficult to imagine that a Netflix television series could have a genuine cultural impact, but it has. The internet has reported increased searches for corsets, headpieces, and elbow-length gloves. The series leads, Daphne and Kate, are linked to a rise in the popularity of the colors sky blue and lilac. When Season 2 began, “Queen’s Balls” were held in major cities, from Chicago to Johannesburg. And there has been a 90% rise in the sale of croquet sets.

When you visit England, you are warmly welcomed into the Regency world. It’s time to make your Bridgerton fantasy come true!