One of the joys of travel is mixing with the locals. On your vacation to Australia, dive in and talk like an Aussie! You may get some good-natured ribbing, but you’re welcome to join conversations in one of the friendliest countries in the world.

Australia’s form of English was created by diverse cultures, history, and heritage. When the British arrived, there were about 800,000 First Nations people, also known as Indigenous Australians. Exposed to European disease, their population decreased, but their take and shape on the English language was dramatic. There are 80 Aboriginal languages in Australia, and Aussies regularly use more than 400 of their words in everyday life. That mix makes English roll.

More than 300,000 Irish settlers had immigrated to Australia by 1900, and Irish slang also became part of the Aussie way of speaking. People who have traveled to Ireland, particularly to the countryside, will recognize many of the terms.

Australian film stars give us the three distinct classes of Australian speech. Steve Irwin, nicknamed “The Crocodile Hunter,” was a wildlife expert, zookeeper, television personality, and conservationist. He had a working class accent. Quite broad, the word ‘kite’ becomes ‘koite’ and ‘nice’ sounds like ‘noice.’ A general accent is spoken by most Australians—listen to Hugh Jackman and you’ve got it. Cate Blanchett has what is known as the cultivated accent; it sounds quite British. A favorite is the mixture of the rolling Aboriginal language with the cultivated English that we hear in the popular Bush Mechanics series. 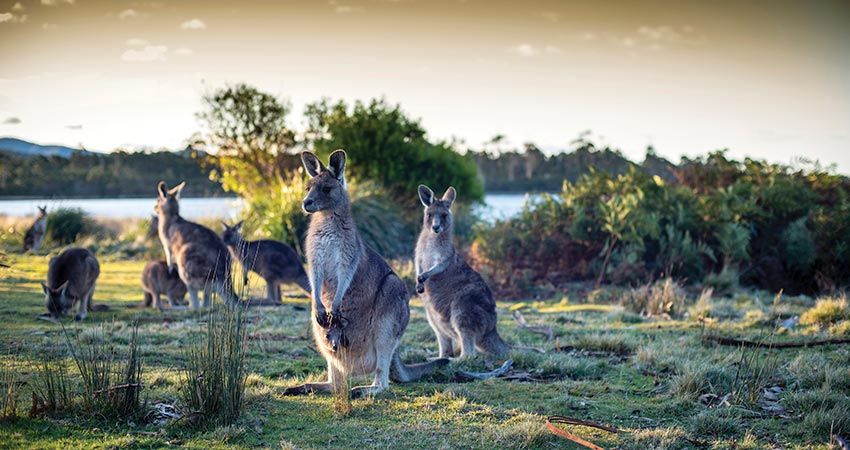 Here are some favorite words and phrases to use when you talk like an Australian:

Bung: This is an Aboriginal term that literally meant “dead” in the Yagara tongue. Today, it means something is broken or out of action. If someone’s car is “bung” you’re not going anywhere.

Tinnie: Can of beer

To do your block: To lose your temper

Billabong: This comes from the language of the Wiradjuri people in New South Wales. It describes a pool of water that is left behind when a river changes course or when flood waters recede.

Nick off: Go away

Deadly: When used by an Aboriginal person, it means awesome or great!

You must have kangaroos loose in the top paddock: You are crazy

Pull your head in: Stop being a smart arse

See ya this arvo: See you this afternoon

If you can translate this, you’re on your way to thinking and talking like an Australian:

I was on my way to the dunny when this bloke stopped me in my tracks and gave me a real earbashing about the prices at the nearby bottleo! Like I owned the joint or something!

He looked sort of crook to me, and I almost felt sorry for him, but then he started in again, him wearing those budgie smugglers… not a great look when you’re acting like you’ve got kangaroos loose in the top paddock.

“Pull your head in and nick off!” says I.

He headed to the beach, and it was the last I seen of that yobbo. Hopefully, he had a mob waiting for him there to calm him down.

Aboriginal terms and ideas, plus Irish and English, are the heart of beautiful Aussie Speak. When you vacation in Australia, get into the rhythm of the language. It’s at least half the fun of being in the land Down Under!

The 7 Best Places to Get Into Australia’s Gold Rush