Hiking Trails of the Lake District

The stunning landscapes encompassed by the Lake District National Park offer some of the best walking trails in the UK. The huge number and range of trails that exist take walkers through unique Lakeland scenery, allowing them to experience the lakes at their most natural and awe-inspiring.

Whether you’re seeking out an easy stroll, a moderate day-long hike, or a more difficult hill scramble, the Lake District has an option for you. Often accessible from the towns and villages of the region, and served by public transport throughout the year, the Lake District is also a very easy place to enjoy a walking holiday whatever your fitness level or interests. Below are just a few of our favourites, ranked from easy to difficult.

A perfect entry-level Lake District walk is the three mile loop from Ambleside, taking in the much admired High Sweden Bridge. The walk lasts between two and three hours (depending on how many stops are made for photographs!) and requires no previous walking experience.

From the popular village at the head of Lake Windermere, the path leads walkers into the Scandale valley. But despite its proximity to Ambleside, the homes and businesses that make the village a hub for tourism abruptly end at the village boundary at the mouth of the valley, to be replaced by woodland, becks (streams) and fells (the hills and mountainsides of the lakes).

Perhaps the only signs of human activity you will find are old moss-covered dry stone walls and the ancient High Sweden Bridge which is your aim. Reached along an easy and well-cared-for path that gently rises in height, the former pack horse bridge was part of a trade route between Ambleside and the village of Patterdale, before the construction of the new road over Kirkdale Pass.

As you return, the trail provides breath-taking high-level views of Rydal and Grasmere lakes (after a short steep rise onto a ridge running from Low Pike). The views continue all the way back to your starting point at Ambleside, where there are plenty of cafes in which to rest tired limbs.

Having eased in with the short Ambleside Loop or Coffin Road footpaths, you might be eager to attempt one of the slightly more challenging Lake District walks. Needing a little more preparation, we would recommend having a good map of the route, as well as a compass. Though there are plenty to choose from, we’re big fans of the hike between Borrowdale and Thirlmere.

Lasting around seven hours and extending 12 miles, the route requires some navigation and technical skill. The first part of this Lake District trail takes in the flanks of Borrowdale, on Derwentwater, before leading walkers onto a high-level path packed-full of amazing views. Don’t miss ‘Surprise View’ after crossing Watendlath Beck, for unexpected sightings of Derwentwater and Skiddaw – the sixth-highest mountain in England – too.

It continues amid crags and over High Seat and High Tove peaks. Both a road and permissive path lead down to Thirlmere Reservoir, dammed in 1894 to provide nearby Manchester with water, where the path ends after passing across the top of the dam.

If hiking from Borrowdale to Thirlmere sounds a little too much like hard work, consider the Great Gable trail via Moses Trod instead. Shorter than our highlighted walk at only six miles, it takes in the impressive Gable Crag as well as Smugglers’ Retreat, linked to the illegal distillation of whisky by an infamous quarryman called Moses Rigg. 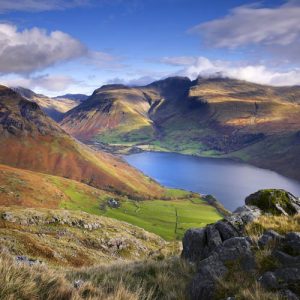 There are a number of routes that include reaching the summit of England’s highest mountain, and none of them are for the inexperienced walker. At 3,209 ft (978 m), Scafell Pike may not be the highest of mountains, but its remote location and rapidly changing weather conditions elevate these Lake District trails to a difficult classification.

Reaching Scafell Pike via Cam Spout includes passing through all the Lake District can throw at you. It begins with a steady climb through Upper Eskdale and around the edge of the bogs of The Great Moss. An easy scramble at the side of Cam Spout Crag leads on to the summit of Scafell Pike, before the path descends again into the isolated Little Narrowcove. At times the path can be hard to decipher, and this hike requires fording of the River Esk, which can be tricky when in spate after rains.

It’s also possible to summit Scafell Pike from Langdale, a popular location for walkers, fell-runners and outdoor enthusiasts of all kinds. A full-day hike of up to eight hours is needed to cover the 11.3 miles of this Lake District trail. It’s well worth picking a clear day, and not just for the impressive panoramas of Langstrath, Borrowdale, Eskdale and Wasdale on offer along this route.

The one downside is perhaps that following this route takes you out and back the same way, meaning you are forced to repeat the albeit stunning path along Scafell Ridge. If you’re feeling particularly strenuous you can also add on an ascent of Scafell, Scafell Pike’s sister mountain, adding about two hours and three miles to the hike.

For those eager to reach the summit of Scafell Pike without the difficulty level of the above paths, the simplest and quickest trail is the Hollowstones Route beginning at the National Trust car park at Lake Head, Wasdale. Expect it to take between two and three hours.

The Lake District National Park is a treasure-trove of hiking trails. Walks can be as simple and easy as the three mile stroll looping around picturesque Ambleside, moderate in their technicality and distance like that from Borrowdale to Thirlmere, or full-on hikes lasting all day and needing prior experience. Above all though, there are a huge number and range of trails available, whatever you are looking for.  If you like to stay active while traveling, be sure to include the Lake District on your England vacation itinerary.

7 Things to do Without Shakespeare in the Mix