Just out, the movie Downton Abbey: A New Era¸ sees Julian Fellowes further embroiled in the dramas, loves, loss, betrayal, servant gossip, and glorious homes of the Crawley family. This latest in the series is, again, pure entertainment and we enjoy every moment in the Yorkshire countryside. We’re also given a look at new, extraordinary film settings in England, Scotland, and France this time around. For fans who want to see where the magic takes place, here are some of the top film locations!

Lady Grantham is played by Maggie Smith, and her performance is worth every on-screen moment. In Downton Abbey: A New Era she inherits a grand home in the south of France. In the movie, it’s called, “The Villa of the Doves.” In reality, it is Villa Rocabella. Built at the end of the 19th century, it is a belle-epoque villa that has had many lives and many uses. It is, quite simply, a dream. 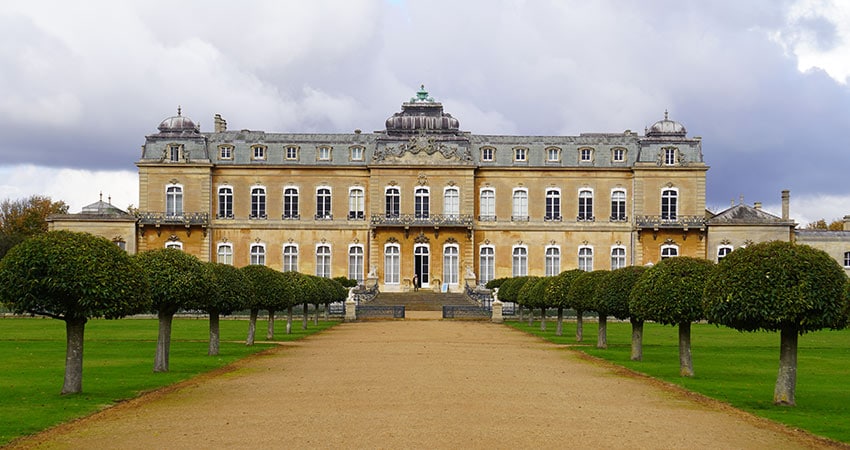 Here we have a curious mix. Because of travel uncertainties during filming, a number of scenes shot outdoors, supposedly at the villa, were taken at the Wrest Park Country Estate. This is an English Heritage site on 90 acres of picture-perfect gardens, and it is open to the public. Explore the grounds, and you’ll discover a fountain and pavilion that were built in the early 1700’s.

When the inimitable Crawley family heads to France, we see the Royal Yacht Britannia sailing across the screen as they cross the channel. This was a feat of film magic. The Britannia was a royal residence, and it is now permanently docked in Edinburgh. You are invited to climb aboard and get a taste of the history and stories that occurred during 948 state visits by the royal family. (Also known as The Firm.)

We won’t give names here and spoil the fun, but when two characters decide to get married, they do so at a gorgeous estate in Suffolk, Belchamp Hall. The property is pure Queen Anne, and was the perfect venue. There is also a 13th century church on the gracious grounds. 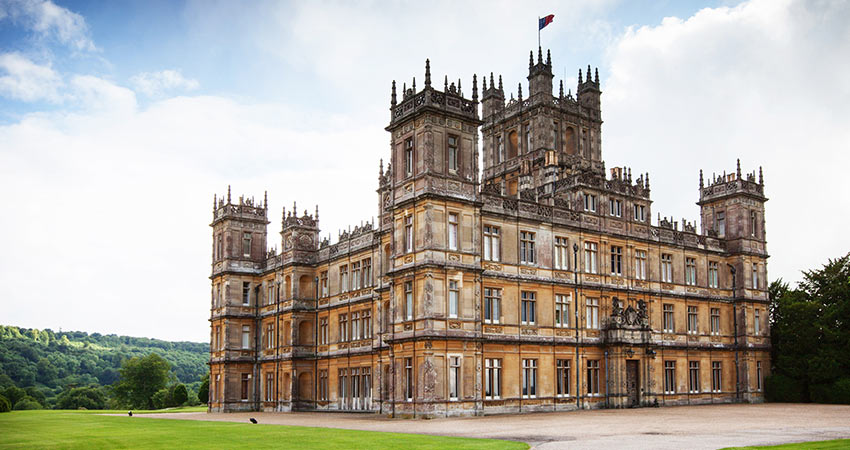 Downton Abbey, itself, is played by Highclere Castle. Highclere Castle is a 5,000-acre Jacobethan country house in Hampshire, England. Lancelot “Capability” Brown designed the park. Highclere Castle is the country seat of the Earl and Countess of Carnarvon, and it has been since 1679. Visitors to the castle can wander the expansive grounds as well as explore several rooms both upstairs and downstairs. Do not miss the Egyptian Exhibition throughout the cellars.

Downton Village itself was filmed in the Cotswolds at beautiful Bampton. Churchgate House, the old Bampton Rectory, was used for the exterior shots of Isobel Crawley’s house. St. Mary’s Church is where Edith was jilted at the altar by Anthony Strallan. And the Bampton Library served as the hospital and doctor’s surgery. Bampton itself has been settled since the Iron Age and the town is listed in the Domesday Book. Historically a market town, today Bampton is a civil parish.

The Downton Abbey Railway Station was filmed at the Horsted Keynes Station in West Sussex. It is where Mary waved Matthew off to war and where young Mrs. Crawley goes into early labor. The station is on the Bluebell Railway heritage line. The London Brighton and Southcoast Railway built the station in 1882. The Bluebell Railway restored the station to the mid-1920’s period.

Byfleet Manor was the filming location for the private residence of the Dowager Violet. Many a victim fell to her sharp tongue and quick-witted comebacks here. Byfleet Manor is an ancient property. There is a written reference to the property dating from 727 and the Domesday Book lists the manor in 1086. The manor house as it stands today was built around 1686 and restored in the early 20th century. The property recently sold for £6 million – nearly £2 million above the asking price. 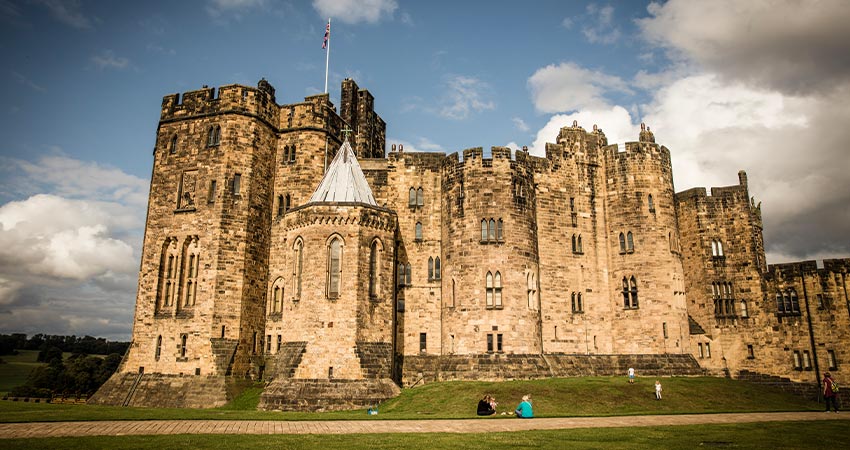 Brancaster Castle, hired by Rose’s father-in-law, Lord Sinderby, for the grouse shooting was filmed at Alnwick Castle. The Grantham’s dinner with Bertie Pelham and his family was also shot here. The grounds, State Rooms, and semi-ruined Hule Abbey featured prominently. Alnwick Castle has been home to the Percy family for over 700 years and today it is the family home of the 12th Duke and Duchess of Northumberland. The castle was also used for filming some of the Harry Potter movies.

When the Crawley daughters had a problem, they usually went to their aunt, Lady Rosamund, for help. Her home, 35 Belgrave Square, was filmed at West Wycombe House. West Wycombe Park in Buckinghamshire has been home to the Dashwood family for over 300 years. It was built by the notorious libertine, Sir Francis Dashwood, in the 18th century. The home was meant to be his pleasure palace, and as such was built as an ornate Palladian structure. The house was given to the National Trust in 1943, though the Dashwoods continue to occupy the house. 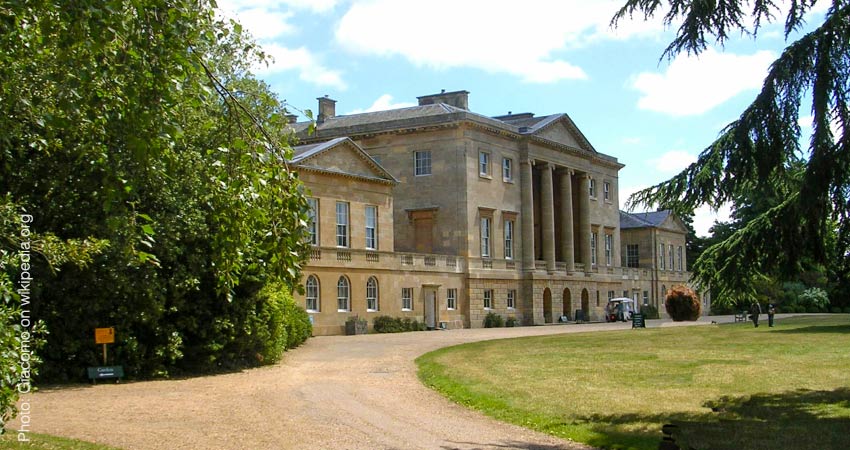 The interior scenes of Grantham House, especially during the social season, were filmed at Basildon Park. Here Rose was presented at court and Edith reconsidered leaving her illegitimate child in Switzerland. Basildon Park sits on 400 acres of parkland and gardens. The house was built between 1776 and 1783 for Sir Francis Sykes in the neoclassical style. It was never fully completed and passed through a succession of owners until Lord and Lady Iliffe bought the house in the 1950’s and carefully restored it.

When Matthew and his mother first arrive in Downton, they stay at Mrs. Crawley’s private residence. Many battles of wits with the Dowager also took place at Mrs. Crawley’s. That residence was filmed at Hall Place. Hall Place was built in 1537 for Sir John Champneys. Sir Robert Austen extended it in 1649. The original house was built of stone, but the extension was built of brick, resulting in a distinctive, clearly contrasting house. 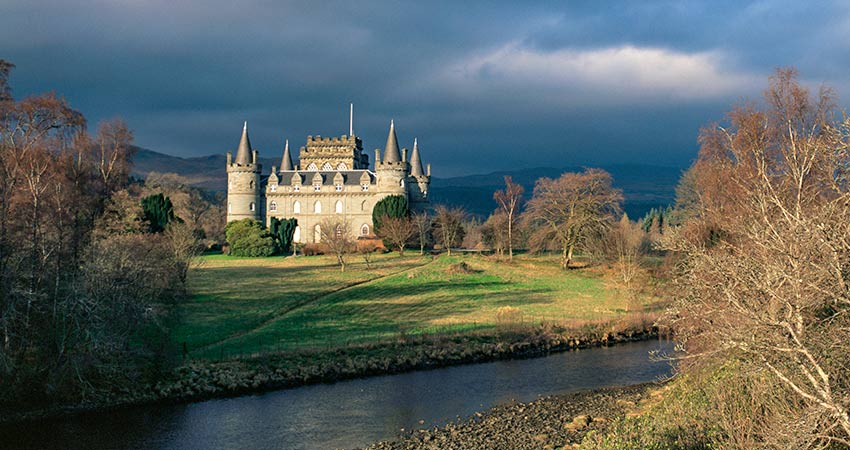 The Christmas special with Matthew, Mary and their new baby was filmed at Inveraray Castle, better known to Downton fans as Duneagle Castle, home to Lord and Lady Flincher. Inveraray Castle is located in Argyll in western Scotland. It is on the shores of Loch Fyne, Scotland’s longest sea loch. It has been the seat of the Duke of Argyll, Chief of Clan Campbell since the 18th century. There are 16 acres of gardens and the estate in total covers 60,000 acres.

First Mr. Drewe, then Mr. Mason were tenants of Yew Tree Farm. Edith regularly visited here to see her illegitimate daughter, Marigold. (Here being Cogges Manor Farm.)  Once a working farm, Cogges Manor Farm is now a heritage center that gives visitors an insight into farm life. It depicts rural life in Oxfordshire during the Victorian era. The manor house is a Cotswold stone building dating back to the middle of the 13th century; the original kitchen and part of one hall have survived to modern times.

Lincoln Castle served as York Prison, where Mr. Bates was sent after he murdered his wife. Lincoln Castle is the oldest filming location featured on the show. William the Conqueror built a motte and double bailey castle on the site of a pre-existing Roman fort here in the 11th century. As a secure place, the castle was also frequently used as a prison. A gaol was built in 1787 and the castle remained in use as a prison until the mid-19th century.

Lady Rose gave her debutante presentation at Buckingham Palace during the 2013 Christmas special. As Buckingham Palace was unavailable for filming, Lancaster House stood in its stead. Lancaster House was commissioned in 1825 for the Duke of York and Albany, King George III’s second son, and was initially known as York House. The Duke died in 1827 and the house was purchased and finished by the 2nd Marquess of Stafford. The Louis XIV interiors and impressive art collection that make Lancaster House such a breathtaking place are attributed to him.

While Highclere Castle is the upstairs side of Downton Abbey, Ealing Studios is where the majority of the downstairs scenes are filmed. Scenes were filmed on Stages 3A and 3B, but once filming completed the sets were struck and removed. Even though the sets are gone, Ealing Studios is worth a visit. It is the oldest continuously working studio facility for film in the world.

There are a number of other sites to see. There is the Albert Memorial in Kensington Gardens and The Criterion in London. Halton House and Wadsworth Manor also deserve a mention. And Stockers Farm Rickmansworth is worth a visit as well.

Our 5-Night Vintage England itinerary will give you the opportunity to explore Downton Abbey filming locations from the first seasons. Or, let us make your Downton Abbey vacation, featuring favored destinations and the new locations you’ll come to love in Downton Abbey: A New Era!