10 Authentic Castles in England to Experience up Close

For those who love castles, England is hard to beat.  The country has a long, rich history of royalty and conflict, which necessitated the construction of more and more fortified residences from which to rule.  Whether your tastes run to Norman, Victorian, Gothic or Tudor, England has a castle to meet your needs.

It is difficult to talk about Windsor Castle without using superlatives.  Located 20 miles west of Buckingham Palace, Windsor Castle is the largest and longest continuously occupied castle in Europe.  It has over 1000 rooms, 300 fireplaces and 450 clocks.  The Great Kitchen is the oldest working kitchen in the country and has served 32 monarchs.  The castle and surrounding grounds cover over 5000 acres.  It houses some of the finest pieces of artwork in the Royal Collection.  And St. George’s Chapel is the resting place of ten monarchs, as well as the planned burial site of Queen Elizabeth II.

Leeds Castle in Kent is frequently called the loveliest castle in the world.  It is a Tudor structure created by Henry VIII for his first wife, Catherine of Aragon.  Leeds passed into private hands shortly before the English civil war and the last private owner was Lady Baillie, who installed extravagant French interiors in the early 20th century.  Today the castle sits on two islands in the middle of the River Len and is surrounded by 500 landscaped acres.  When visiting the castle, make sure to see the maze, the secret grotto hidden at the center of the maze and the amazing vineyard.

In a bend of the River Avon, a few miles north of Stratford-upon-Avon, lies Warwick Castle.  The site dates from 914 AD when Ethelfleda, daughter of Alfred the Great, ordered an earthen rampart built to repel invading Danes.  While the rampart kept the Danes out, it could not keep out William the Conqueror, who built a motte and bailey castle on the site in 1068.  Stone replaced wood in 1260 and Caesar’s Tower was built in 1350.  The castle changed hands many times, including a few murders and one execution for treason.  The castle is now owned by Merlin Entertainments and has attractions like the Horrible Histories Maze and Castle Dungeon, not to mention a falconry display and a trebuchet.

This was William the Conqueror’s headquarters, as it were, in London proper, built just inside the old Roman wall shortly after his conquest of Britain in 1066.  Successive monarchies encircled William’s Great Keep with an inner ward and then an outer ward to create a castle complex with 20 towers and two curtain walls.  In its colorful history the Tower has been a home, a prison, a zoo, a mint and an observatory.  Today the Tower of London is a UNESCO World Heritage Site and one of the few medieval buildings still standing. The Crown Jewels are on display here and the Tower is the home of the world-famous Beefeaters as well as the Tower Ravens.

In West Sussex overlooking the River Arun is Arundel Castle.  Roger de Montgomery, cousin of William the Conqueror and first Earl of Arundel, built a motte and double bailey castle in 1068.  Unlike many castles, Arundel Castle has stayed in one family, with only the occasional reversion to the crown, since 1138.  While the family made many improvements to the castle over the centuries, the castle also suffered numerous attacks and sieges.  The castle visitors see today is largely the product of restoration efforts by Henry, 15th Duke of Norfolk, that were completed in 1900.  The real draw for many, though, are the expansive gardens.  There is the Collector Earl’s Garden, the Stumpery, the Cut Flower Garden, the Organic Kitchen Garden and a peach house and vinery that was built in 1850.

Alnwick Castle is the second largest inhabited castle in England; only Windsor Castle is bigger.  Alnwick Castle is in Northumberland along the River Aln and has been owned by the Percy family for over 700 years.  The Percys still live in the castle, but only occupy part of it, opening the rest for tours to the public.  Many visitors will recognize the castle as the location for Madame Hooch’s flying lessons in Harry Potter and the Sorcerer’s Stone or as Brancaster Castle from Downtown Abbey.  In addition to the imposing castle and immaculate grounds, there is an art collection as well as an archive that may be viewed with an advance appointment.

It is known as the Key to England and has been England’s first line of defense since the Iron Age.  In Kent, overlooking the White Cliffs of Dover, lies Dover Castle.  It was built on a site that had earthen bulwarks in place before the Romans arrived.  There is also a Roman lighthouse and archeological evidence of a Saxon castle there.  William the Conqueror sacked the castle and stone works started going up with Henry II.  Today Dover Castle is the largest castle in Europe.  History lives here, with buildings, displays and reenactments from just about every major period in British history.  There are medieval tunnels, a World War I command post and a reenactment World War II Christmas here, and much, much more.

In County Dorset, on the Isle of Purbeck, stands Corfe Castle.  The castle dates to William the Conqueror, and was partially built of stone, suggesting it was an especially important castle.   Later monarchs, however, did not share William’s sense of urgency about Corfe and Elizabeth I sold the castle to Sir Christopher Hatton in 1572.  He sold the castle to Sir John Bankes, and it was his wife, Lady Mary Bankes, who held off the Parliamentarian forces during the English Civil War.  The first siege of the castle was unsuccessful, but the second siege resulted in the castle being slighted (partially destroyed).  Today the ruins are owned by the National Trust and open to visitors.

It is called the King of Castles.  Bamburgh Castle, in coastal Northumberland, is nine acres of British history.  There is archeological evidence of occupation all the way back to 10,000 BC.  Romans called the place Din Guayrdi.  Saxons, Vikings and Normans all came through here, too.  Scots regularly raided the castle and during the War of the Roses, Bamburgh Castle became the first castle in England to be defeated by artillery.  Today the castle belongs to the Armstrong family and has numerous areas open to the public.  Popular areas include Constable Tower, the Medieval Kitchen, the King’s Hall and the Keep.  Summer visitors may have the opportunity to participate in one of the ongoing archeological digs. 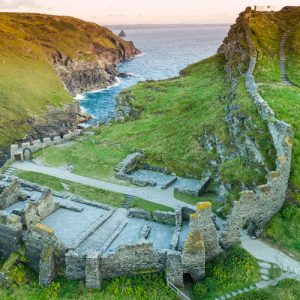 In north Cornwall, on Tintagel Island, lies Tintagel Castle, the repudiated birthplace of King Arthur.  Geoffrey of Monmouth, in his fictionalized 12th century history of Britain, named Tintagel as the place of Arthur’s conception and the story took on a life of its own.  While a number of Roman artifacts have been found in the area, no one has yet to find any Roman structures.  There are, however, the remains of a Dark Age settlement as well as the ruins of a medieval castle built by Richard, 1st Earl of Cornwall, in the 13th century at Tintagel.  There is also a lovely little beach below the castle.  The site is part of the Duchy of Cornwall and managed by English Heritage.

There are many, many other castles to see in England.  St. Michael’s Mount, Bodiam Castle, Framlingham Castle, Bolsover Castle, Lincoln Castle and Hever Castle just to name a few.  And if you are wondering why Buckingham Palace and other luxurious abodes are not on this list, it is because they are not castles.  A castle is a fortified residence, but a palace is not.

If you appreciate history and the medieval arts… or if you just want to see some cool castles, make sure to include any (or all) of these amazing castles in your England vacation itinerary!