Ireland is easy to love, and its friendly atmosphere makes it the perfect place to celebrate milestone moments. Anniversaries, Weddings, Vow Renewals, Friendship, Family Reunions, Retirement… Life is good, there is always cause for joy, and Ireland is a superb backdrop for your plans.

Here are some of our favorite places to make merry in Ireland. Included are hidden, plus well-loved, gems in each destination. 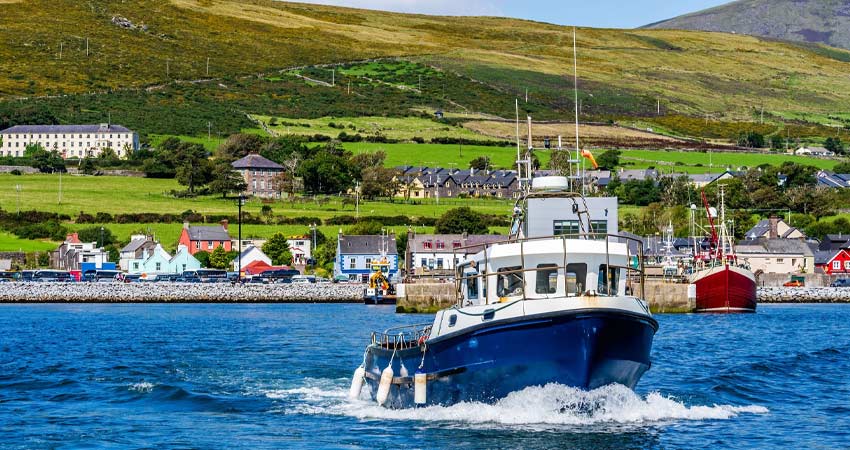 Once an off-the-beaten path fishing village, Dingle is the charm you imagine when you think of Ireland. The brightly colored shops line up like crayons in a coloring box. Local handcrafts abound—when you see something you love, don’t think twice, buy it as a memento of this glorious time. In the evening, music tumbles out of pubs and fills the streets. At last count, there were 67 pubs in this town of 2,000 people. Grab a seat, dig into a bowl of hearty fish stew, and at 9:00 pm you’ll be treated to the best traditional music in the country.

The gem: Take a ferry to the abandoned Blasket Islands. No one has lived there since the 1950’s, and you’ll likely have the beach to explore on your own. The most westerly islands in Europe, this is an authentic eco-experience. Feel the power of the wild Atlantic here.

Dublin is a dazzling, compact city with character, charm, and style. Explore her on foot and engage your sense of wonder. The Temple Bar district has cobblestone streets and diverse shops. Enter a Georgian neighborhood to admire the gentle grace of shady trees, gardens, and porticos. Magnificent cathedrals and Trinity University give you a deep sense of this city, founded in 841 by the Vikings.

The gem: The Brazen Head pub, Dublin’s oldest, dates back to 1198. It is located in the original settlement that would become the Dublin of today. The Father Matthew Bridge is next door, and it crosses the River Liffey. Reed matting was placed upon the river so travelers could safely cross. The pub has been lovingly restored. This is the place to sit and feel time and troubles slip away. 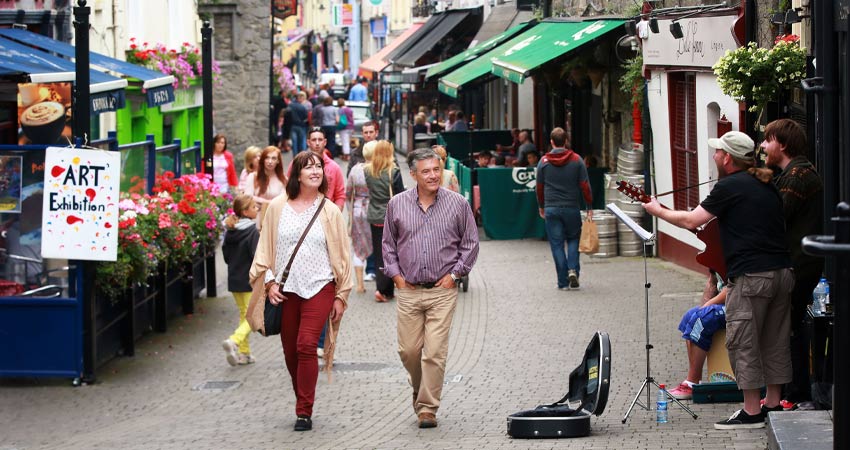 Kilkenny has a medieval atmosphere that is absolutely unique. For 500 years the powerful family of Ormonde Butlers held sway here—Kilkenny Castle is their ancestral home. For a time, it vied with Dublin as the political center of Ireland. The lanes are narrow and winding. The shop fronts are playful. Head to Kilkenny Castle, and then go around back to the stables. It’s there you’ll find the Kilkenny Design Center. All items are handcrafted, and you won’t find them elsewhere. Stop at Kyteler’s Inn for a pint, and you’ll be regaled by the stories of Alice Kyteler, accused of witchcraft in the 14th century.

The gem: St. Canice’s Cathedral stands on ground that has known Christian worship since the 6th century. (Kilkenny is the English version of Cill Chainnigh which translated means Church of Canice.) The area around the cathedral is called “Irishtown,” and it is the oldest part of the city. Climb its 9th century round tower. At 100 ft high, it offers spectacular views of the city and surrounding countryside. This is the place to gain perspective. 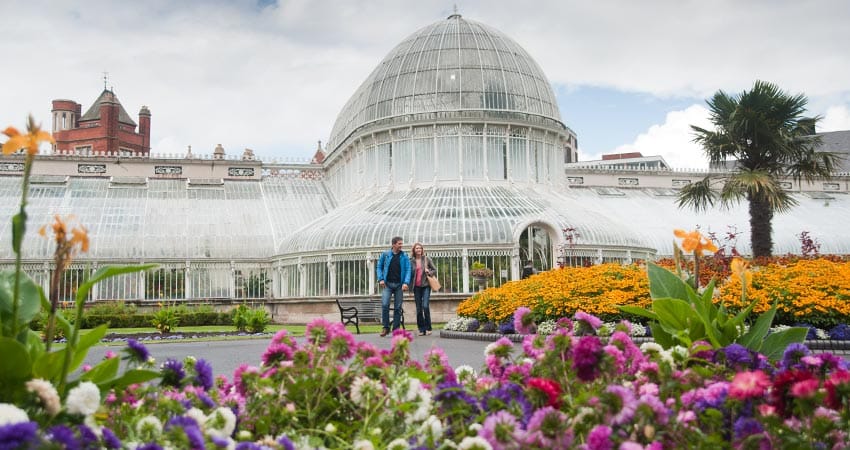 The second largest city in Ireland, each area has its own appeal. Consider exploring the Queen’s Quarter. This is the home of Queen’s University Belfast and there are peaceful parks, art house movies, and cool coffee houses. You’ll find that the Ulster Museum has something for everyone—discover dinosaurs who once roamed the area, a mystical Egyptian mummy, and a large collection of Irish art. Head to the Botanic Gardens and fall under the spell of the Palm House. The dome itself is a miracle, and the building is the oldest example of a curving iron-and-glass structure in the world.

The gem: The area around Belfast has been inhabited since the Bronze Age. Just outside town is the Giant’s Ring, a henge monument near Shaw’s Bridge. The site has a circular enclosure that is 590 feet in diameter, placed on 7 acres, and surrounded by an earthwork bank. East of the center is a small passage tomb that faces west. Like Newgrange, the Giant’s Ring is a Neolithic structure, built around 2700 BC, making it older than the pyramids. This is the place to appreciate the Great Mystery. 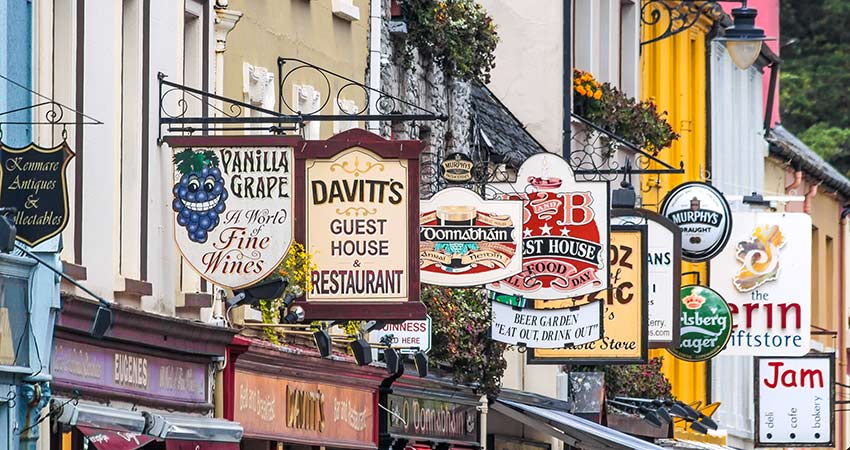 Situated on Kenmare Bay, surrounded by soft mountains, filled with colorful streets, plenty of shops, and innovative restaurants, Kenmare is a sweet getaway. Though often named by travelers as one of their favorite towns, Kenmare somehow remains quiet and almost dignified. This is one of the few places where you’ll have the chance to try your hand at falconry. With help from a master falconer, you can take a hawk walk. Watch as this magnificent bird lifts off and soars above you. In the evening, listen to the peaceful sounds of the shoreline.

The gem: The Lime Tree Restaurant is Kenmare’s landmark dining establishment. Housed in a building built in 1832, you’ll feel the air of understated elegance as soon as you step inside. The foods are locally sourced, and the chefs are proud of cooking with passion. In a town that is world-renowned for its restaurants, this one stands above them all. Feel the joy of fresh foods prepared with love! 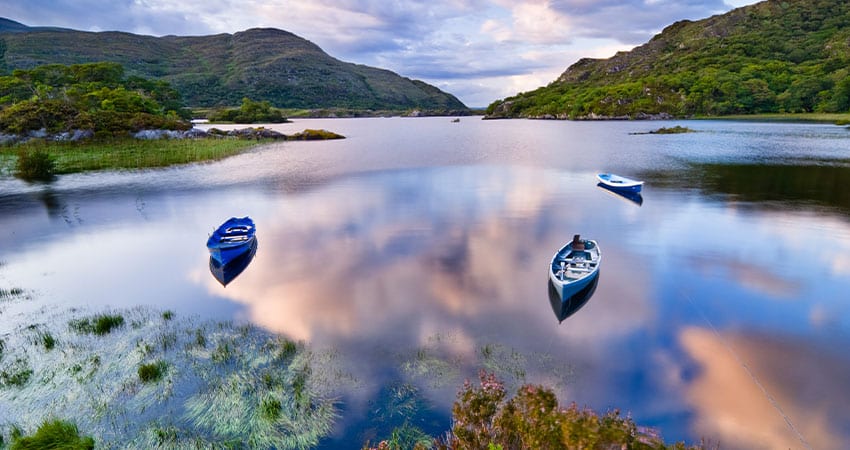 A park that covers nearly 25,000 acres, has three large lakes, magnificent mountains, contains Ireland’s largest area of ancient oak forest, and has the only remaining herd of native red deer is simply irresistible. Muckross House is a focal point of the park—this home is a massive Victorian, completed in 1843. There are several paths leading from the house. Choose the Dinis Walk, and you’ll see Torc Waterfall, plunging 60 feet into a lake. For a thrill, follow on to the Meeting of the Waters where the Upper Lake flows into Muckross Lake. Continue, and you’ll come to Dinis Cottage, Brickeen Bridge, and Muckross Abbey, founded in 1448. Then hop on a jaunting car and rest your feet during a ride through the woods. This is the kind of day that makes memories.

The gem: Valentia Island is accessible from Killarney, and it has an enchanting mix of trees, exotic plants, and the Skellig Experience Centre. With a population of only 700, Valentia is powerfully wild but has an extraordinary past. In 1927, Charles Lindbergh made his first landfall in Europe over Valentia on his solo flight from New York to Paris. Fossilized footprints preserved in Devonian rocks show that 385 million years ago a primitive vertebrate passed by in what was then a sub-equatorial river basin. They are among the oldest signs of vertebrate life on land.

The Glanleam House’s sub-tropical gardens flourish in this mildest micro-climate of Ireland. They came from South America, Australia, New Zealand, Chile, and Japan. The telegraph field is the site of the first communications link between Europe and North America—the transatlantic telegraph wires began operating from Valentia in 1866. The Skellig Centre is dedicated to UNESCO’s Skellig Michael, and it shares Valentia’s stories with a mix of immersive images and sounds. 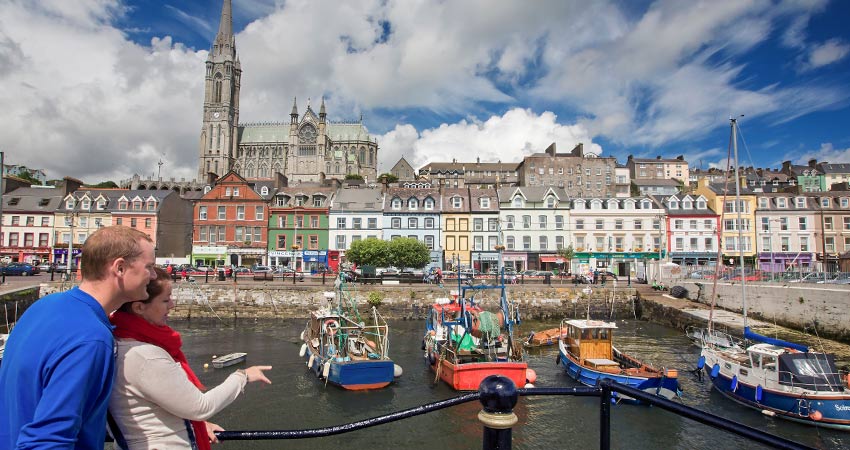 The large, lovely city center is an island between two channels of the River Lee. The river leads out to Cork Harbor, one of the largest natural harbors in the world. Originally settled by monks in the 7th century, Cork was invaded by Vikings in 915. The city was once entirely walled, and you can see the remains of the medieval town center around North and South Main streets. Spot rare sea birds as you walk the cliffs to Paradise Cove. Learn about the last days of the Titanic. Explore the English Market and taste Jameson Irish Whiskey.

The gem: Fota Wildlife Park is part of the Zoological Society of Ireland and is located about 3 miles east of Cork. With 106 species of birds and mammals, it is the best wildlife and conservation center in Ireland. Some animals roam freely… imagine walking beside a ring-tailed lemur or a wallaby. You’ll also see rare red pandas, tapirs, and siamang gibbons. Larger mammals, such as giraffes and bison, live in safely enclosed spaces, created to replicate their natural habitat. Be still and listen to birdsong and animal chatter mix in the air around you.

Sometimes we need to escape the noise and the busy-ness of the everyday to celebrate, and we have so many reasons to celebrate. Ireland was made for joy. Let us take you there!