Italy is sexy, exotic, sensuous, fun, has a rich history, and it is a thrill—which is why we like to travel there. We expect all those qualities, and more, from Italian cars. At the beginning of the 20th century, Italian automakers led the way in the realm of design and often ingenuity. Today’s Italian carmakers, many of whom are descendants of those original families, continue to amaze us with their innovation and performance. Here are some favorites along with a few surprises. 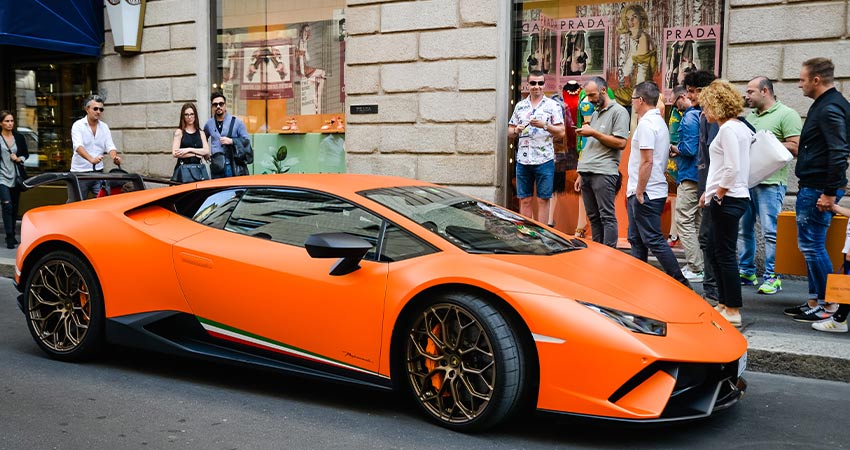 Automobili Lamborghini S.p.A. makes their luxury cars and SUV’s in Sant’Agata Bolognese, Italy. Through a series of ownership changes, the company is now owned by the Volkswagen Group, through its subsidiary Audi. Manufacturing giant, Ferruccio Lamborghini, founded the company in 1963 to compete with Ferrari and produce a grand touring car. His cars had the unusual features of a rear mid-engine and a rear-wheel drive. (Ferruccio also founded a tractor business, it’s still in operation, and it is located in Pieve di Centro, Italy.)

The Super Trofeo is a series of Motorsport events held by Squadra corse, using their Super Trofeo model vehicles, including the race versions of the road-approved models— the Huracan and Gallardo. These events are held in a series of three in America, Asia, and Europe. Any Huracan GT3 customer may enter, and as well Pro, Pro-Am, Am, and Lamborghini Cup drivers. The excitement of the season ends with a world final.

Lamborghini’s sweetheart auto right now is the Huracan STO, and it can be yours for about $330,000 and counting. The “O” in STO is short for omologata, a description that is shared with only a few other highly-valued Italian autos. It has large wings, a roof vent, and a multitude of sleek trims. This car is a statement. 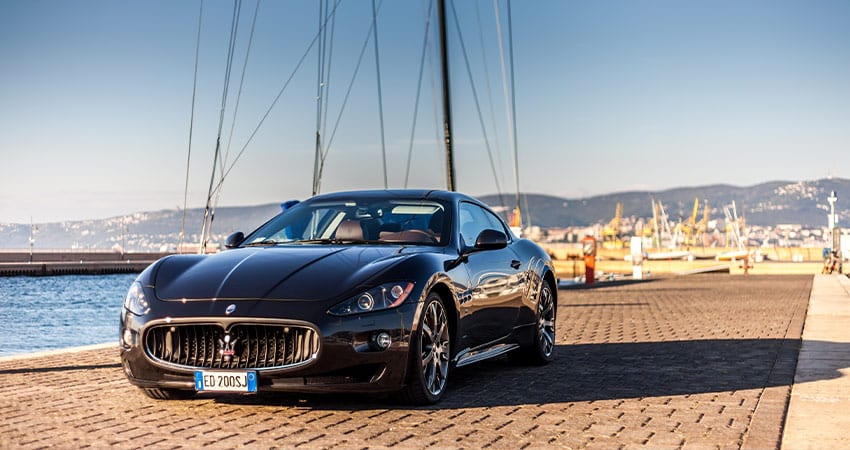 This Italian car company was founded in 1914 by five Maserati brothers in Bologna, Italy. (In 2021, the company was bought by Stellantis, and the headquarters was moved to Modena, Italy.) One of the first Maseratis, driven by the brother Alfieri, won the 1926 Targo Florio. They began making race cars with 4,6,8, and 16 cylinders. Mario Maserati created their logo, the trident, to symbolize strength. It was truly a family affair.

In 1937 the Maserati sold to the Orsi family, from Modena. The remaining brothers stayed with the company as engineers, and their success in building race cars continued. In 1939 and in 1940, a model 8CTF won the Indianapolis 500. They were the only Italian car manufacturers to have done so.

Their new sweetheart? In 2022 Maserati revealed that they will be offering teams and customers the MC20 GT2. Specifications include a new Nettuno engine with Maserati Twin Combustion technology, double-wishbone suspension with semi-virtual steering axis, and a carbon fiber monocoque.

Jean-Marc Finot, Senior VP, Stellantis Motorsport, stated that: “Maserati Corse is bringing the link between Formula E factory program and our road cars with the MC20 GT2. This new step is completing the legacy and the legitimacy of Maserati in Motorsport. The MC20 is a fantastic road legal car. We are happy that our passionate customer will enjoy racing with it.” Prices start at $220,000. 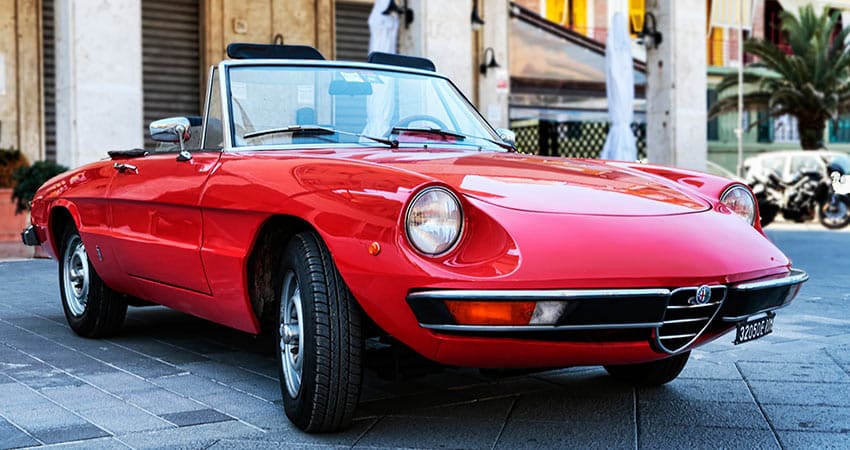 The Alfa is a luxury car that is now a subsidiary of Stellantis. Founded in 1910, in Milan, Italy, the company was created by a group of anonymous investors. The Alfa Romeo has been involved in auto racing since 1911, competing in the Targa Florio. Alfa Romeo has competed in Grand Prix motor racing, Formula One sportscar racing, touring car racing, and numerous rallies. They won the first world championship for Grand Prix cars in 1925.

Their sweetheart car might just be the Alfa Romeo Giulia. This is a four-door luxury car that sits comfortably next to a Mercedes family car. On the whole, this is a historic line of high-performance cars that feature both speed and luxury. The business calls themselves, “Distinctive by Design,” and 111 years of defying convention has created a beautiful driving experience. 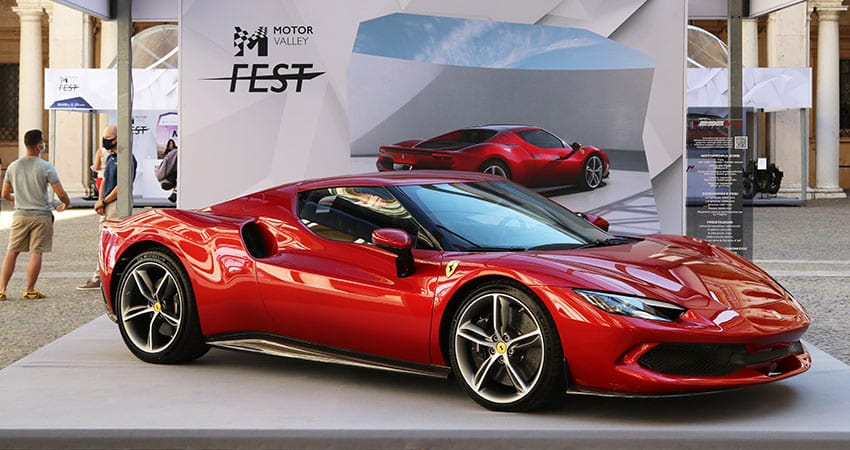 Ferrari was founded by Enzo Ferrari, Maranello, Italy, in the year 1939. This luxury car came out of the Alfa Romeo racing division. Their first car was built in 1940, and the first Ferrari-badged car in 1947. The rest is history. From the very beginning, Ferrari has been known for racing, especially in Formula One. It holds the most constructors’ championships, 16, and has the highest numbers of drivers’ championship wins, at 15.

Ferraris are emblematic of speed and luxury—people notice you on the road. In 2014, Ferrari was rated as the world’s most powerful brand by Brand Finance. Ferrari fashion includes clothing and eyewear for everyone in the family. The Lego Technic Ferrari Dayton SP3 is the latest in a collaboration between the two mega-businesses. There is a Ferrari Museum, a couple of theme parks, and custom experiences. Ferrari applies genius to both auto design and in the ability to build a global community.

There is no Ferrari that can properly be called entry-level. The Portofino is the least expensive. It is $215,000, before you start adding options, and is an elegant roadster. Their most expensive? That would be the SF 90 Stradale. (If you have to ask, you can’t afford it!) In 2019, the speediest street-legal Ferrari was the 488 Pista. Its max speed is over 210 mph, and it can go from zero to 60 mph in under 3 seconds. Are they good investments? Usually, yes. For example, in 2018 a Ferrari 250 GTO sold at $70.2 million dollars. Mind-boggling!

The current sweetheart is the SF90 Stradale. Called by some the most significant car of the brand, the engineering and design are faultless. 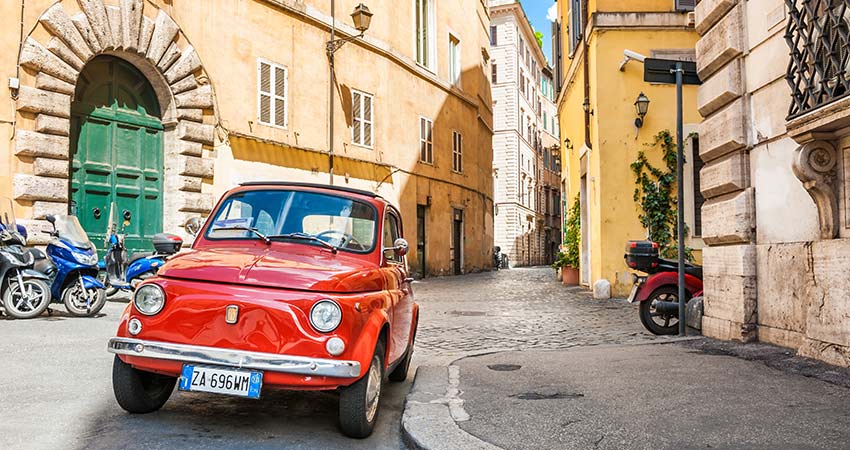 Since 2021, Fiat has been a subsidiary of Stellantis, although it traces its roots back to 1899, the year the first Fiat was produced. Today, Fiat is the largest automobile manufacturer in Italy. It was third in the world after GM and Ford until the late 1980’s. It has been awarded the European Car of the Year more than any other automaker, and it has lower emissions than other vehicles sold in Europe.

Their current sweetheart is the electric Fiat 500. It leads the pack in the post-internal combustion era, while maintaining Italian style. The Arbath Fiat 500 is the racing end of the brand, and it is affordable. One option? The Biposto’s $10,000 race-style, non-synchro gearbox. This is pure fun. 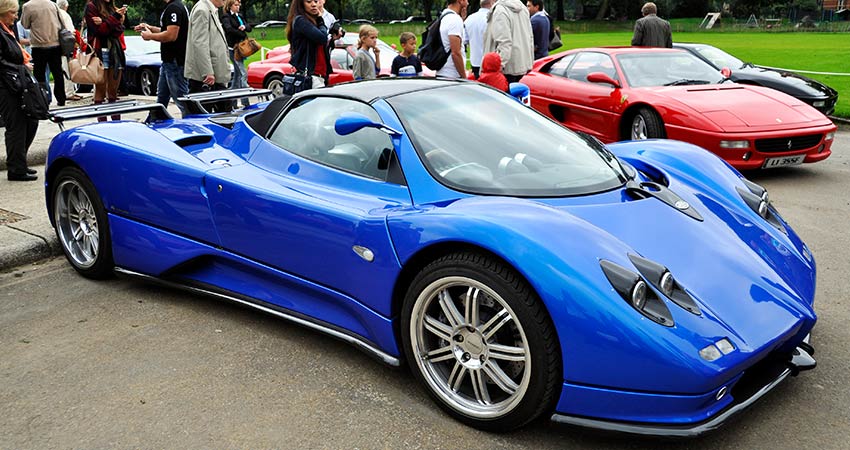 The Pagani is a sports car with innovative carbon fiber components. Founded in 1992 by an Argentinian, Horacio Pagani, it is based in San Cesario sul Panaro, near Modena, Italy. Formerly the manager of Lamborghini’s composites department, Pagani began construction of his Fangio F1 prototype with a Mercedes Benz V12 engine. It was first presented to the public at the 1999 Geneva Motor Show.

The Zonda HP Barchetta was the last of the production line. Only three were produced, and the cost was $15 million. Never fear! You can still buy a Pagani Zonda. The car company in Modena will build you a brand new 2022 model for $3 million. The wait list is long, but if you have that kind of cash, you’ll likely love that its top speed is 263 mph, and it accelerates to 60 mph in 2.7 seconds. It has a seven-speed sequential gearbox and a single disc clutch.

The sweetheart is still the Pagani Zonda. Exclusive, extravagant, and a show-off, the car is considered to be one of the best Italian supercars in the world. It is reliable, very fast, astonishingly beautiful, and easy to drive. 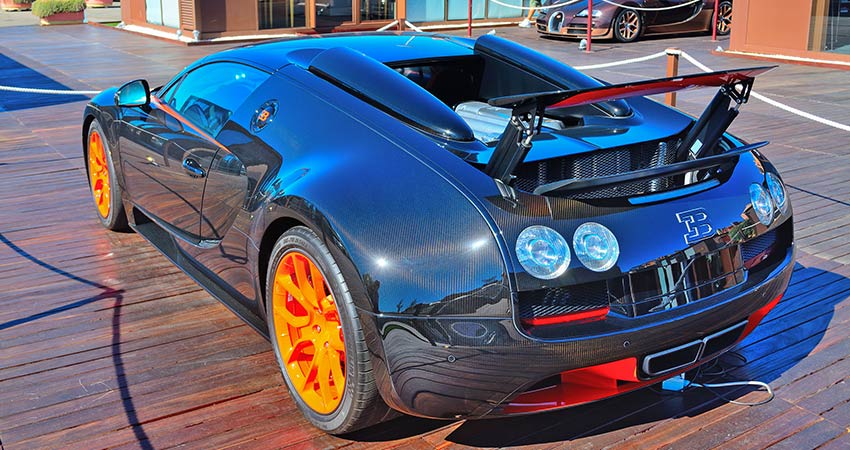 Some have the misconception that the Bugatti is a French luxury car. It is not. Founded in 1909 by Ettore Bugatti, in 1987 the Italian businessman, Romano Artioli, bought the brand. He then designed and built a new factory in Campogalliano, Modena, Italy. The original cars were known for their sleek, beautiful design and their victories in car races. The most famous designs included the Type 35 Grand Prix, the Type 41 Royale, the Type 57 Atlantic, and the Type 55 sports car.

The least expensive Bugatti is the Veyron model, and it comes in at $1.9 million. Its W16 engine has four turbochargers that cost $6,400 each, and they’re connected to air coolers that cost $18,000 for the Bugatti company to purchase. The Bugatti has history, it is graceful, and despite its low production figures it is a global brand. 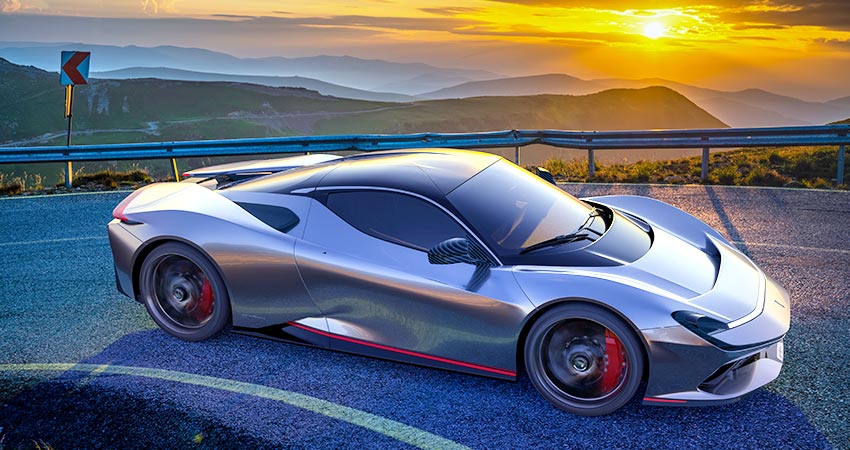 Style and strength. How do you build that into an electric race car? The Pininfarina is a classic Italian sports car that answers that question. This new auto has a production run of just 150, and a price tag of over $2 million dollars. It is riding the new wave of electric hypercars. After 90 years of designing others’ cars, including 67 years of Ferraris, the automaker is launching the 1874-hp Battista hypercar. It accelerates from 0-60 in under 2 seconds. The car was unveiled at the 2019 Geneva Motor Show.

Production began in 2022, and the units will be equally divided among buyers from Europe, North America, the Middle East, and Asia. Every car is hand-built in the facility in Cambiano, Italy. Before the first car was officially introduced, 40% of the automobiles were reserved. Pininfarina states, “Design innovations, exquisite styling, and ultimate performance create a true Pininfarina. This is the most authentic and exciting automotive story imaginable.” And they might be right. It is the luxury sports car created for this time in history. 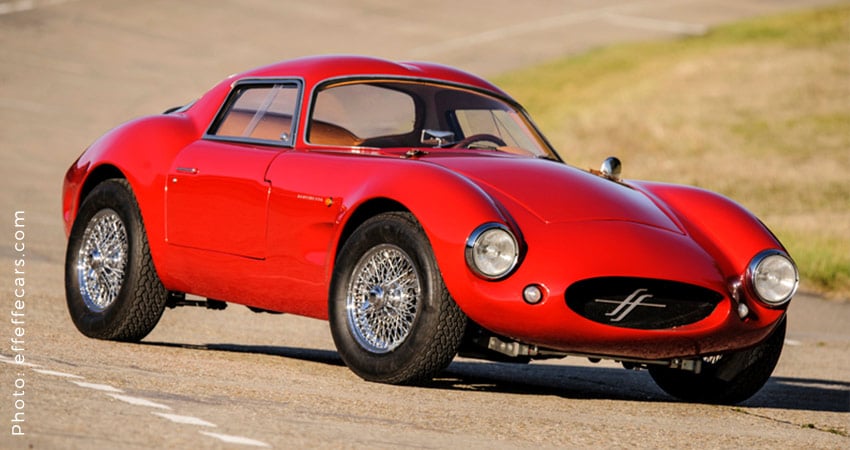 The Top Marques Monaco has become the auto trade show for the super-rich, and the luxury supercar is a strong pull. One of the stars of the show is Effeffe Berlinetta. Two brothers, Leonardo and Vittorio Frigerio, drove around Europe and fell in love with the notion of driving in a classic ‘50’s sport car such as the Gran Turismo. They posed a challenge to themselves: Could they build a light car that had speed, style, aerodynamics, and full functionality? They wanted no digitized components, just simple beauty.

They set to work and created a completely hand-made auto, built to the legendary standards of the 1950’s. The body is made of hand-beaten aluminum, placed over a tubular steel spaceframe. It follows the templates of the classics we love from the ‘50’s and ‘60’s. It has a carb-fed 180PS—plenty when you consider that it only weighs 1,720 pounds! It is a dream when taking the curving, mountain roads.

Passion and experience have come together in what they call, “An Italian Dream Become Real.”

Even if we’ve never driven in a supercar, or been a passenger, we thrill to the sight of one driving at top speed in the movies. Some of us attend, or watch, Formula One events. The love of fast, sleek, gorgeous cars is a global phenomenon. Knowing the stories of the cars we love, deepens our appreciation of these works of art on wheels.

When you visit Italy, we’re happy to arrange a custom tour of an automaker’s plant–just let us know! Italy is the natural home of daring and style… Make it yours.