When visiting Ireland, especially Dingle and Dublin, listening to live Irish music is near the top of everyone’s bucket list. It’s almost impossible to sit still when the tunes kick up—it moves us. The music unites Irish people, and we are welcomed into their circle of hospitality.

The Irish phrase, Mo cheol thú, is often heard in the West where Irish is still spoken. It’s high praise for a job well-done. Literally translated, it means You are my music. That is how central music is to the culture.

These are the instruments at the heart of Irish music. Enjoy! 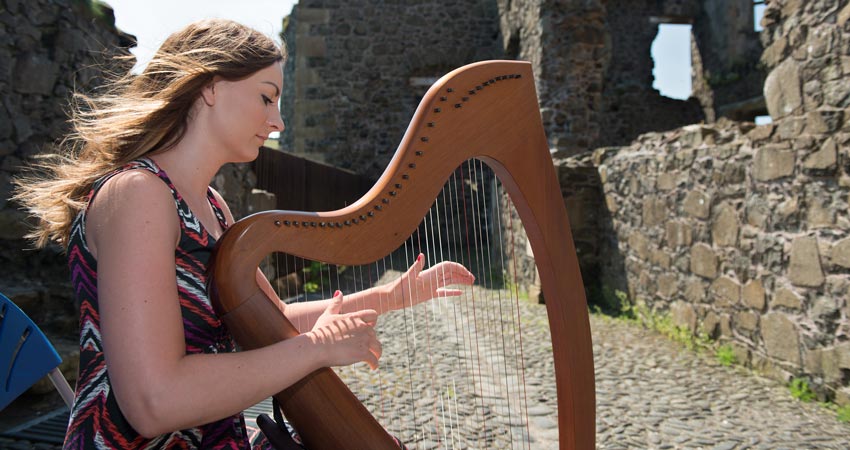 Ireland is the only country with a musical instrument on its flag, and that instrument is the harp. It’s an ancient instrument, and legend has it that it came to Ireland by way of Egypt over 2,000 years ago. The harp was played for the Irish Chieftains until the Flight of the Earls in 1607, when Irish nobles left under threat from invading masses.

The harpists became itinerant musicians, traveling from town to village, bringing tales of the wonderful and terrible things they’d seen along the way. The best harpists could make their instruments cause listeners to weep, laugh, be still, or rise up. The Celtic harp is still a thing of beauty, magic, and quiet power.

The Flute and Whistle 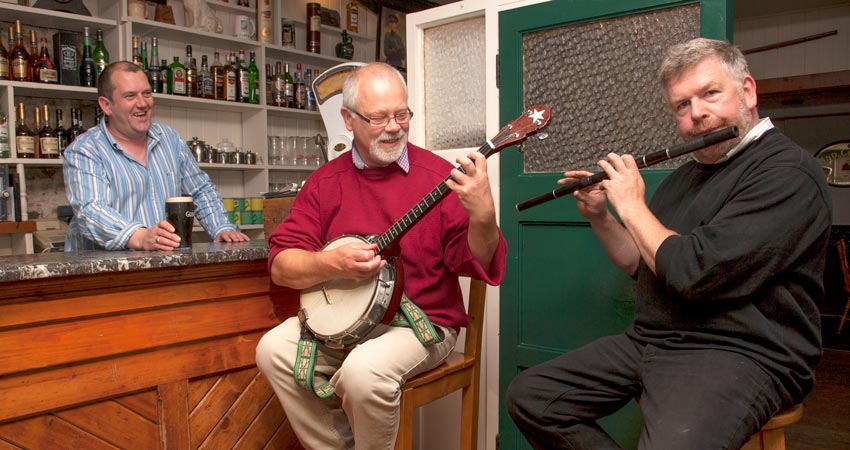 An ancient flute was found in a cave in Slovenia. It is at least 50,000 years old, making it the oldest known musical instrument. Throughout time, flutes have pulled at our hearts and transported us. Flutes and whistles sing the melodies of traditional Irish music, and they get our feet tapping to Irish jigs and reels. 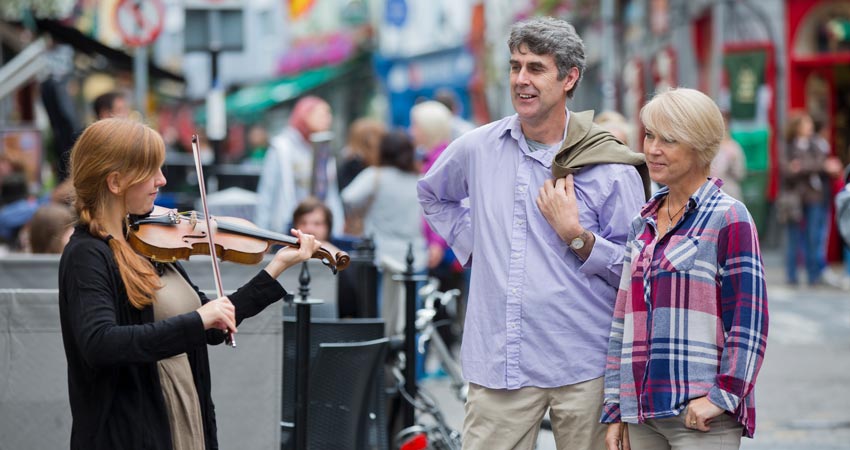 A fiddle is just the same as a violin, but it’s played less delicately and held differently. The basic sound also differs from county to county. In Donegal, the strings are plucked high and wild. In Sligo, the tunes flow.

The Accordion and Concertina 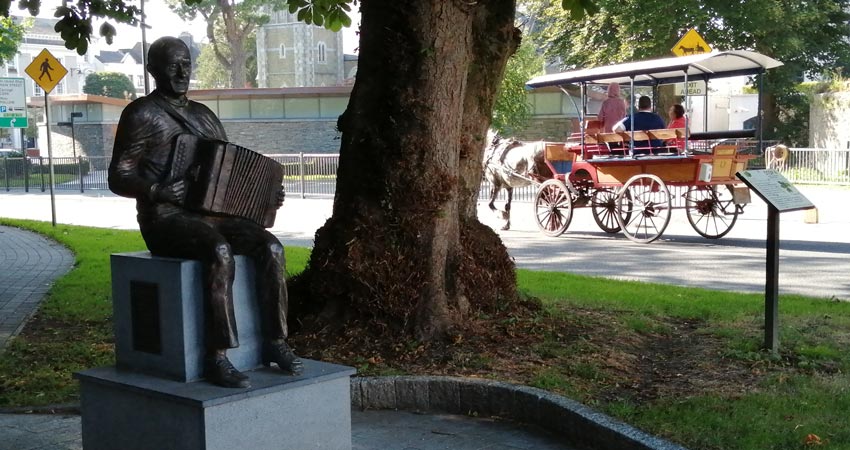 The accordion came to Ireland from folks who emigrated to the States and then brought music back to Ireland as they visited old friends and family. They had picked up the accordion from their Italian neighbors in New York and Boston! Today, every Irish band has at least one “button box” or accordion player, and they drive the music.

Also called a squeezebox, the accordion is a heavy instrument that hangs from the shoulders by straps. A full-sized accordion takes a lot of muscle to hold and pull the bellows out and in. It has, almost, the range of a piano with the buttons arranged in the circle of fifths. A concertina is small, tuned to one key, and has buttons instead of a keyboard. Pick one up in a shop and give it a whirl! 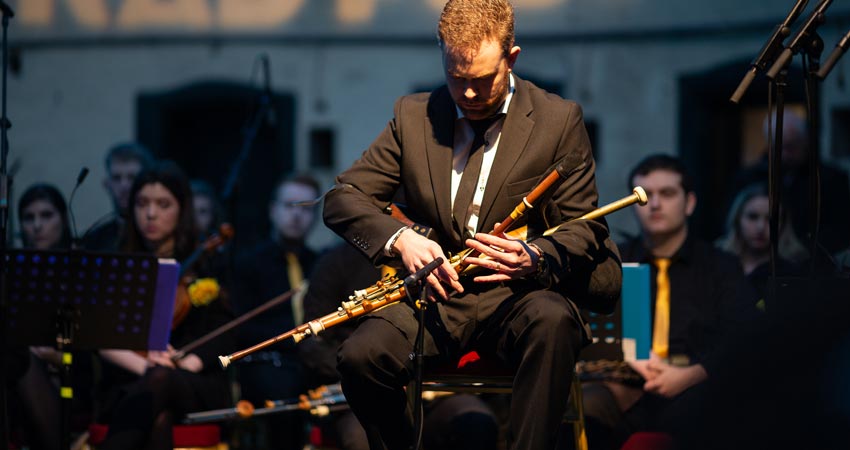 The Uilleann, or Union, Pipes are Ireland’s national bagpipes. Unlike Scottish Bagpipes, or Great Irish War pipes, they have a sweet, quiet sound and are played indoors. The word Uillean means “pipes of the elbow.”  Instead of blowing into them, these have a bag that is inflated using a bellows that’s strapped around the waist and pumped with the musician’s arms.

When used in a band, they are tuned to the Key of D. The musician’s mouth is free, so they may sing or tell stories while making music. Played while sitting, this is a uniquely Irish instrument. 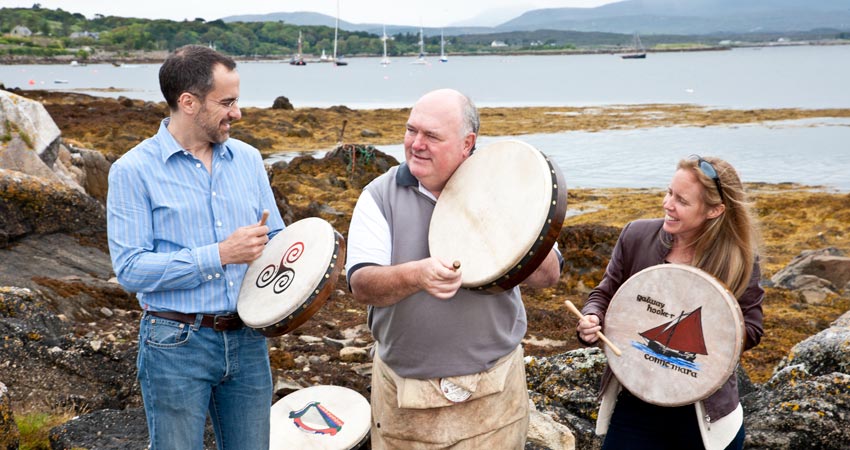 People have stretched skins across frames since the beginning of time but the bodhran, Ireland’s most popular percussion instrument, did not start life out as a drum. It was first used to carry peat and next used to winnow wheat. At some point, someone turned it upside down and discovered it made a terrific sound when beaten or tapped.

How the bodhran is played often depends on the county. It’s usually played with a tipper, a small double-ended drumstick. While the musician uses the drumstick with one hand, they use the other to work the back of the drum, changing its tone and timbre as they move their hand against the skin. Watching, and hearing, a real pro play is mesmerizing and takes the listener to a place that feels ancient, wild, and sacred. 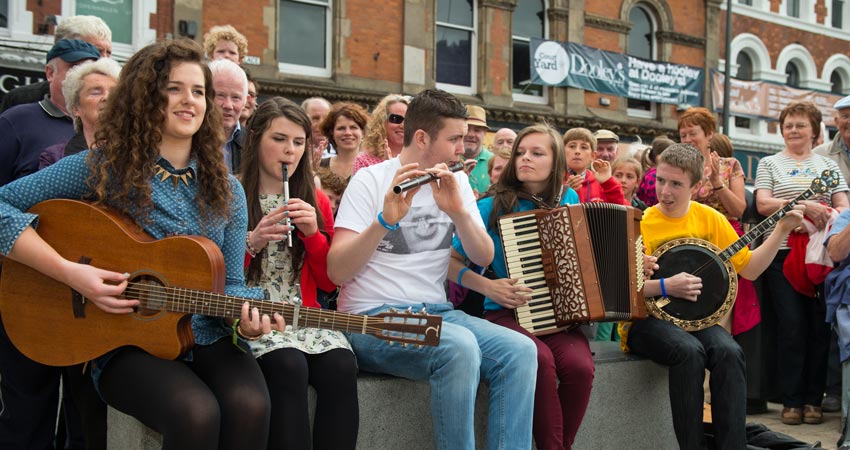 Most Irish bands have at least one guitar, and they’re often played by the lead singer. They work well in a living room or pub. They’re also perfect in large spaces for jigs, reels, and slips. Other guitar players can usually jump into the music and join in. Some musicians not only flat-pick the strings or strum, they also use the body for percussion.

“Music gives a soul to the universe, wings to the mind, flight to the imagination, and life to everything.” ~ Plato

It’s fair to say that music is the unofficial language of Ireland. When you visit the west of Ireland, you’ll hear some of the country’s finest on the Dingle peninsula. There are sixty-five pubs in the town itself, and most have nightly music, most notably at An Droichead Beag and Mac Carthaigh’s. Head to John Benny Moriarty’s and you’ll find that singing along and set dancing are enthusiastically encouraged. Be bold, be happy, and fall under its spell.