A Guide to Authentic Irish Food

It may not be lauded as a gourmand’s paradise, but Ireland has a surprisingly wealthy food tradition, one that is uniquely steeped in the culture and history of the island. From hearty meat stews to comforting seafood chowders, traditional Irish food has always drawn on the very best offerings from both land and sea, with a focus on natural, locally- sourced ingredients. As horizons broaden and palettes become more sophisticated, authentic Irish food has undergone something of a renaissance in recent years. Nowadays, alongside the generously-portioned comfort foods that have long been a staple on Irish restaurant menus, there is a focus on the healthy and the artisanal, where quality not quantity is the order of the day. 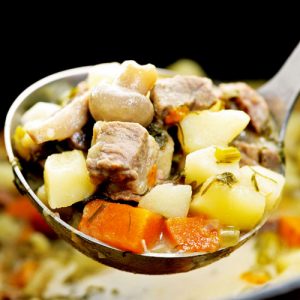 You’ve heard of Ireland’s most famous dish, the classic Irish stew, but did you know that Ireland’s capital city, Dublin, has its very own stew? Coddle, as this stew is known, gets its name from the fact that the contents of the stew are braised or ‘coddled’ in the meaty stock produced by the contents of the dish, namely bacon, potatoes, onions and pork sausages. Coddle may be a prime example of simple Irish fare, but it’s a dish that has a number of famous fans, including writers Seán O’ Casey and James Joyce. For the best Coddle in Dublin, stop by the Woollen Mills, where you can grab a bowl of Ha’Penny Bridge Coddle served with brown bread and butter, perfect for mopping up those meaty juices.

It’s no secret that the potato is the most loved vegetable in Ireland, so much so that many Irish dishes revolve around the humble spud. Among these are Colcannon, a creamy, comforting mashed potato dish containing cabbage, spring onions and lashings of butter. Though known to have originated in Leitrim, ‘Boxty’, a potato pancake that mixes raw potato with mashed potato, is enjoyed throughout the country. To enjoy a traditional Boxty in Dublin, head to Gallagher’s Boxty House, which has a whole menu dedicated to this much loved dish.

Ireland food revolves around the potato to such an extent that the vegetable is not only found on dinner plates, but also in snack foods and takeaways. Tayto, an Irish brand of potato chips or ‘crisps’ as they are known in Ireland, are so popular that they even have their own dedicated theme park in Ashbourne, County Meath. The perfect accompaniment to any night out in Dublin’s capital comes via the Dublin Spice Bag, a deep fried concoction of chicken and chips combined with peppers and spices that tastes a whole lot better than it sounds.

Irish Breads and The Waterford Blaa 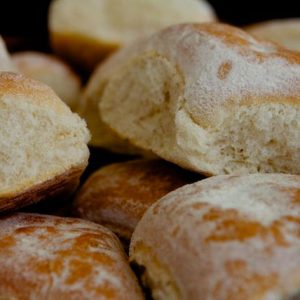 To Waterford and the ‘blaa’, a soft floury bread roll made from yeast, sugar, water and salt. Once baked, the blaa, which dates back to the seventeenth century, is finished with a generous dusting of flour. The blaa is such a Waterford institution that in 2013 it was granted Designation of Origin protection, meaning that only blaas baked in Waterford can use the term ‘Waterford blaa.’ If you are ever in The Déise for lunch, make sure you treat yourself to a freshly baked blaa from Walsh’s Bakehouse, which prides itself as being the home of the Waterford blaa. Locals like to feast on the ‘hang blaa,’ which is a blaa smeared with butter and stuffed with Tayto Cheese & Onion crisps and slices of salty ham.

From soda bread to barmbrack and breakfast rolls, it’s no exaggeration to say that the Irish love bread almost as much as they love potatoes. It’s no surprise then to discover that several variations of ‘potato bread’ exist. The Farl, a triangular potato cake, is often served along with soda bread as part of a traditional Ulster Fry, making for a hearty breakfast indeed.

Though it may sometimes seem like it, Ireland food offerings do not entirely revolve around meat, potatoes and bread. A country of some 18,000 dairy farmers, Ireland is renowned for its award-winning cheeses and rich, creamy butters. From Durrus Farmhouse Cheese to Imokilly Regato and Macroom Mozzarella, some of the best cheeses in Ireland originate in County Cork.

Located just outside the picturesque town of Schull in West Cork, Gubbeen Farmhouse produces a range of products, including a semi-soft cow’s milk cheese that is rich and creamy with a nutty aftertaste. The Gubbeen Farmhouse has won numerous awards for its cheeses including the 2016 Gold Medal at the British Cheese Awards for the ‘rind washed’ and ‘smoked’ versions of its cheese. These award-winning cheeses, which are hugely popular among both visitors and locals alike, appear on many local restaurant menus. While in the area, stop by Hackett’s Bar, a traditional Irish pub that though small in size boasts an impressive artisanal lunch menu. This includes the famous ‘Hackett’s toasty,’ made with ham and cheese straight from the Gubbeen Farmhouse.

A county that makes the most of its dairy tradition, Cork is also home to Glenilen Farm’s award-winning range, which includes cheesecakes, yogurts, butters and creams. These products are so popular that they are stocked not only in the county of their origin, but also throughout the rest of Ireland and even in certain parts of the United Kingdom.

In a country dotted with so many coastal towns and offshore islands that beach living has become something of a way of life, in spite of the always unpredictable weather, it’s no surprise that a lot of Irish cuisine come straight from the sea. From scallops and crabs to Dublin Bay prawns, Ireland is a seafood-lovers dream. The most well-known of all of Ireland’s seafood dishes is its Seafood Chowder, a flavourful combination of fresh white fish and smoked salmon in a creamy sauce that is sure to satisfy even the heartiest of appetites. If you want to treat yourself to an award winning chowder, look no further than Nancy’s Barn in Ballyliffen, County Donegal, where the seafood chowder was recently awarded the prestigious title of ‘Best Chowder in the World.’

Ready to experience some authentic Ireland cuisine first hand?  Let us plan your Ireland vacation and wrap your itinerary in food and beverage experiences.  Our Ireland destination experts have all the insider information on where the locals go to score an authentic Irish meal.

How You Can be Part of Sustainable Travel NOW

The Heroes in Your Family Tree