Lingering in the mists of time are some of Italy’s most ancient, and sacred, sites. Many are close to cities you’re going to visit but they are secret spots. Others are legendary, but their history is deeper than we might believe. When you travel to Italy, put at least one surprising ancient site on your must-experience list. Walking in the path of long-gone dreamers may be the highlight of your travels.

The Temple of Hera, Paestum 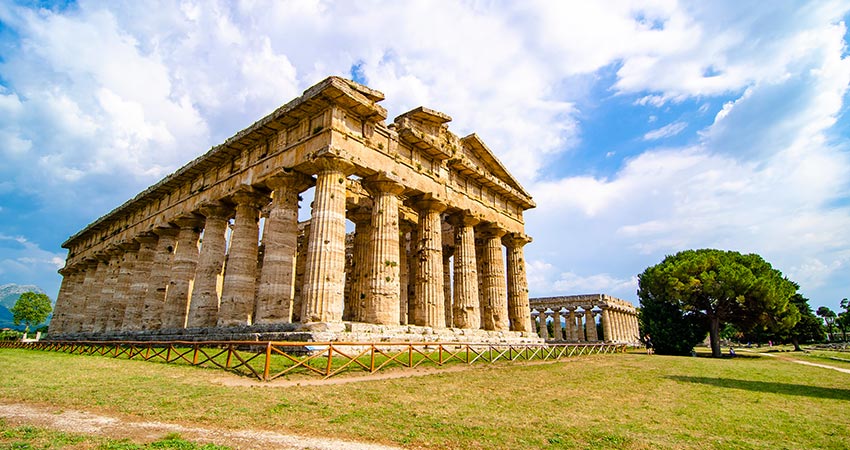 The Temple of Hera, just 55-miles south of Naples, is the finest ancient Greek temple in the entire Mediterranean region. Legend has it that Paestum was founded by Jason and the Argonauts. Archeologists, less poetic, believe it was founded in the 7th century BC by colonizing Greeks. The two main temple buildings are the Basilica, 550 BC, and the Temple of Neptune, built 100 years later and dedicated to the fertility goddess, Hera. A third temple was consecrated to Athena, goddess of wisdom and the arts.

The entire complex was called Poseidonia, named for that temperamental male god. Paestum was taken over by Lucans, Italian people who thrived in the area until 273 BC when it became a Roman colony. After Muslim raids in the 9th century, the temple complex was forgotten, standing desolate and abandoned, only to be discovered in 1752 by an Italian road crew.

Because of the temples’ dedication to female goddesses, archaeologists assume that this site was sacred to early people who felt the power of earth goddesses and spirits. Often visitors report they feel newfound clarity and a surge in their creativity during their visit. Stay open to possibilities! Mysteries abound. 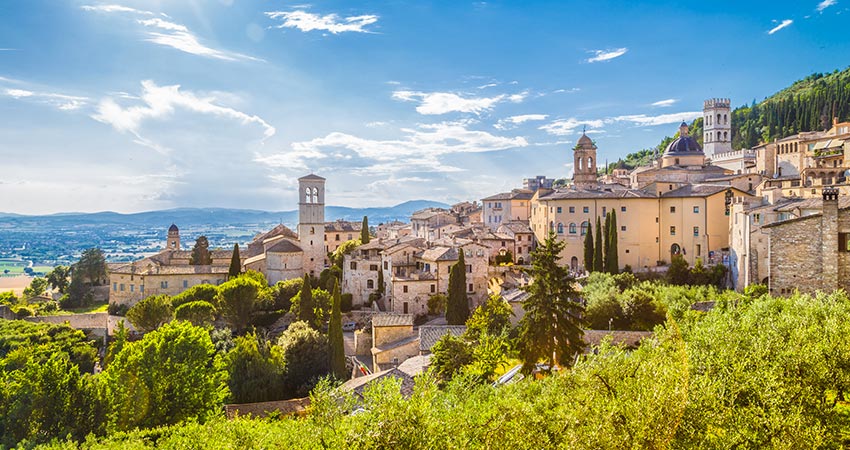 The Medieval town of Assisi is a wonder. Umbria, as beautiful as Tuscany but less-visited, is a glory and the town of Assisi itself is just 90 beautiful miles north of Rome. St. Francis was born here in 1182 AD, but it was a sacred site long before he came along. Legend has it that the ancient town of Assisium was first settled around a holy spring here, and nature deities were worshiped.

Later, around the 8th century BC, the Etruscans came, also entranced by the spring. The Romans followed, building a temple at the spring dedicated to Minerva, goddess of crafts and professions and, later, of war. She is the equivalent of the Greek goddess Athena. During the Christian era, the temple was destroyed, churches were built on the site, and the spring no longer provided water.

Francis of Assisi was born into a wealthy family. He was taken as a prisoner of war and, after being released, let go of earthly possessions and desires. Francis became a mystic who sought peace, and he was the first to draft naturalistic poems in the Italian language. This ancient site is clearly worth a visit. Go to the Basilica of San Franceso, built 900 years ago. Breathe and let go of time. 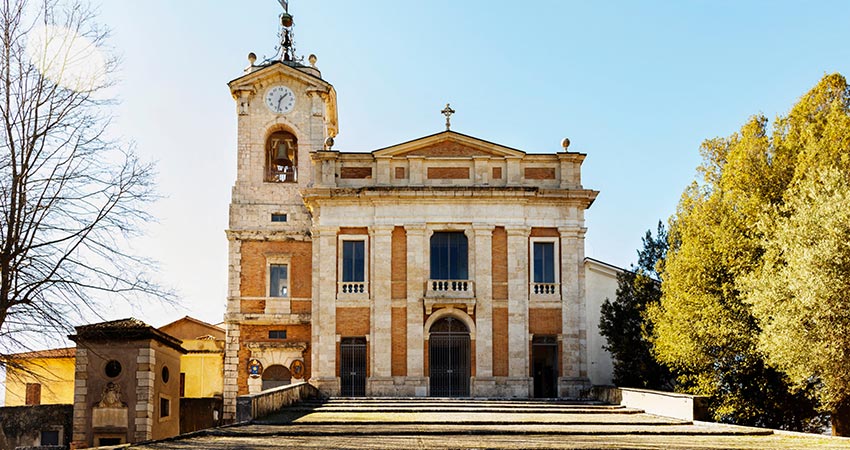 One hour and twenty minutes south of Rome, the area of the modern city of Alatri was founded 4,000 years ago. In 550 BC it was called Hernici, and it was influenced by the Etruscans. Over time, the region was bandied about during various papal administrations, occupations, and political machinations. But the ruins remain and are worth exploring.

There are fortifications made from local limestone, expertly jointed, at a height of 30 feet. Two of the original five gates remain as well as the side entrances. The amazing thing about this ruin is seeing it through the layers of time. Three periods of civilization can be traced on the walls. Thicker walls, ramps, and building skills excelled over time. You can also see an aqueduct, which supplied water to the town.

If you don’t have time to visit the real thing, a reconstruction is in the National Etruscan Museum in Rome. 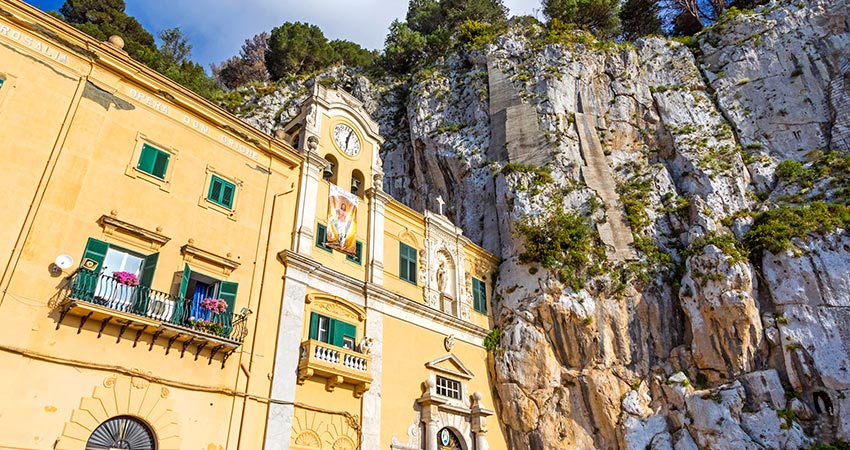 This cave-sanctuary honoring Santa Rosalia, 1,500 feet above the sea and the city of Palermo, is extraordinary. It is one of Sicily’s main shrines, but it has been an ancient site of worship for thousands of years. Archeologists believe the cave was an ancient temple devoted to the Anatolian earth goddess, Cybele, the Carthaginian god Kronos, and the Phoenician goddess of fertility, Tanit.

Rosalia was born in 1130 to a wealthy Norman family—she was handmaiden for the Queen of Sicily. The last eight years of Rosalia’s life was spent in contemplation inside this cave of the Madonna on Monte Pellegrino. It is a place of pilgrimage, miracles, healing, and visions—visitors report feeling her presence. The focal point of the shrine is a statue of Rosalia made of gold and white marble. She reclines, holding her own skull in one hand, and a pickaxe in the other.

Rosalia is the patron saint of Palermo. Strangely enough, this mountain shrine is also a place of pilgrimage for the Hindy Tamil community. The statutory alone is worth the climb up Monte Pellegrino. 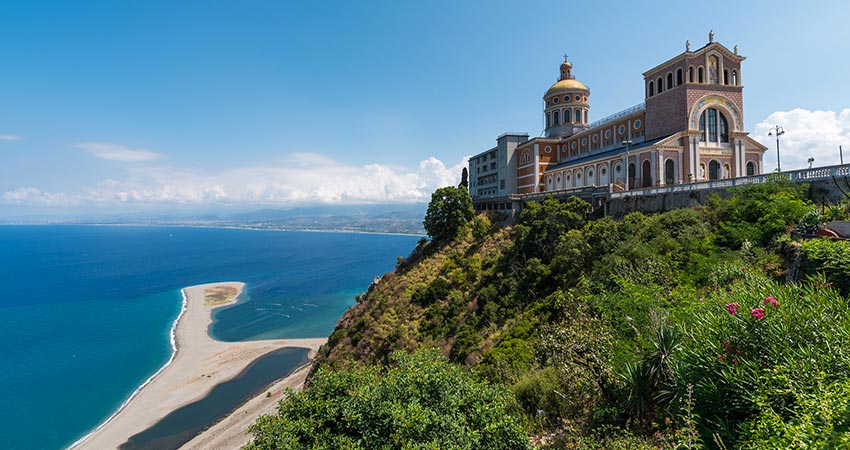 Five miles west of Messina, this is the home of an exquisite ancient statue of a Black Madonna. It was brought to Sicily when it was part of the Byzantine Empire, 1,500 years ago.

It is said that a ship sailed from Constantinople and a tremendous storm rose up as the sailors crossed the Tyrrhenian Sea. The sailors sheltered in the Bay of Tindari. When the seas grew calm, they weren’t able to move. The smuggled Black Madonna was carried to cliffsides, and the ship set sail. Villagers in the Christian community found her, loved her, and carried her to the highest peak.

This peak once had a temple dedicated to Ceres, the Roman goddess of fertility. Scholars believe the Black Madonna holding Baby Jesus was carved in the Middle East in the 5th century. There is also a small 16th century sanctuary here with stunning sea views, and it was built on the site of a temple to the earth goddess Cybele. The Black Madonna was home.

The Holy House of Loreto 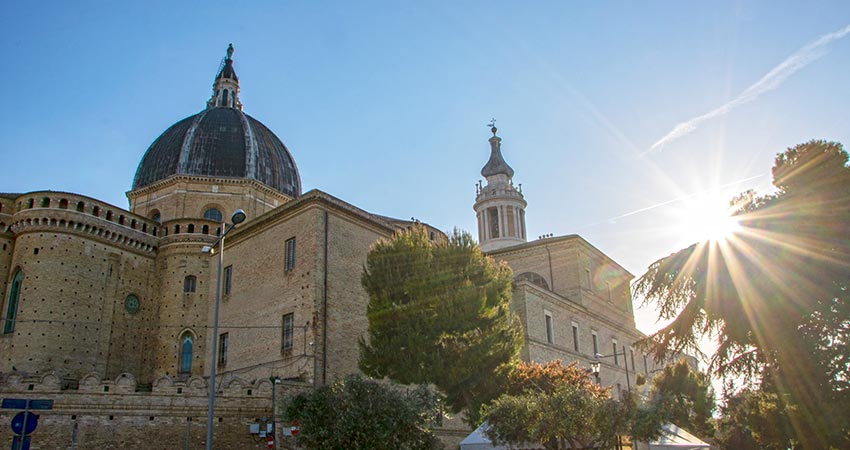 120 miles from Florence, in the beautiful Umbria/Le Marche Region, is Santa Casa della Vergine Maria. This Holy House is said to be the building where Mary was born and where she learned she would give birth to Jesus. Helena, mother of Emperor Constantine, had a church built around the house to protect it.

After the Holy Land came under Muslim Control, the house was moved to glorious Loreto. Archeological evidence suggests that the house may, after all, come from Nazareth. The limestone and cedar building materials are not from Loreto, but they are plentiful in Nazareth.

The Holy House itself is very small. Just a single room with a small altar shelters the beautiful Black Madonna inside. The ceiling is blue with golden stars. 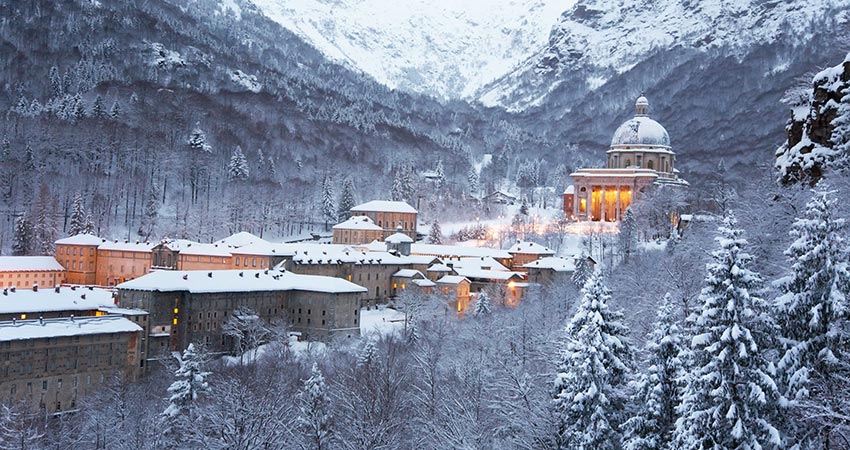 In Northwest Italy, the Piedmont Region, Turin is an elegant city with baroque palaces. Head south and you’re at the Italian Riviera and Cinque Terre. North and you’ll be in the Alps. And in the countryside is an ancient site of pilgrimage, the Sacre Monte di Oropa.

This UNESCO World Heritage site is a complex of devotional chapels. A sacred path leads from one chapel to the next. Built on what was originally the Black Virgin of Oropa, each chapel has representations of the life of Virgin Mary, from the time of her conception to the time of Paradise.

The small and mindful attention to detail, the shades, colors, and tones, creates a warm atmosphere for the visitor. This is fitting and gives the pilgrim a feel of an embracing, loving mother. Baroque work began in 1617, and the exquisite art was created by two brothers, Giovanni and Antonio d’Enrico.

When you visit Italy, indulge. Savor the food, laughter, drink, and people. See the ancient highlights but put at least one lesser-known spot on your list. When you get a feel for Italy’s lush bounty, it’s easy to understand why people have celebrated her feminine forms of fertility and protection for thousands of years.