What is a Tattoo? It’s the evening drum or bugle that calls soldiers to their quarters, and it takes place with clockwork precision. Now it lends its name to one of the most unforgettable experiences in the world.

Over the last seven decades, the Royal Edinburgh Military Tattoo has grown into an extraordinary event that highlights the best of Scotland. Its goal is to become an exceptional immersive event that includes every culture. Its cause is to be the home of creativity, connection, and contributions—all making us stronger.

According to the producers of the Tattoo, “Creativity is our lifeblood. We present vivid, vibrant extravaganzas. We are global citizens, with a special ability to bring people together on a local, national, and international scale.” 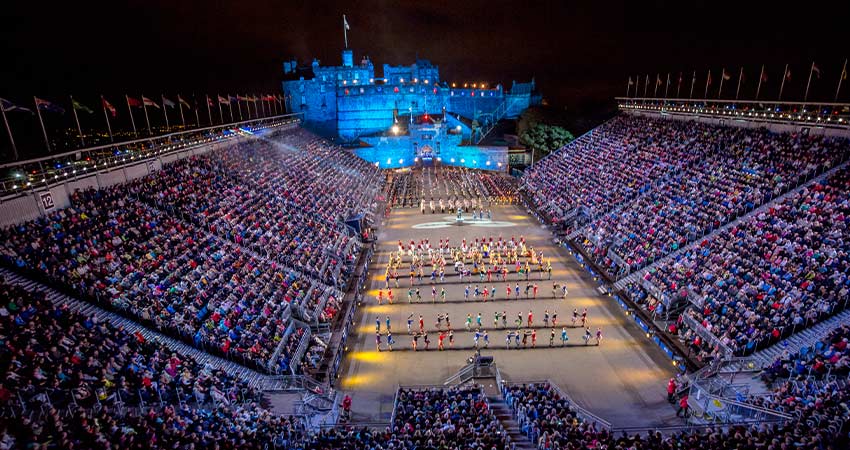 The Tattoo Pipes and Drum, Dancers, and Fiddlers have developed over time with one goal in mind: Share Scotland’s cultural identity on a global level. This is an Edinburgh summer festival; invited artists are from such far-flung places as China, Germany, Prague, Norway, the United States, Australia, and New Zealand. The money earned from performances is for various charities. The Esplanade of Edinburgh Castle becomes a place of astonishment. 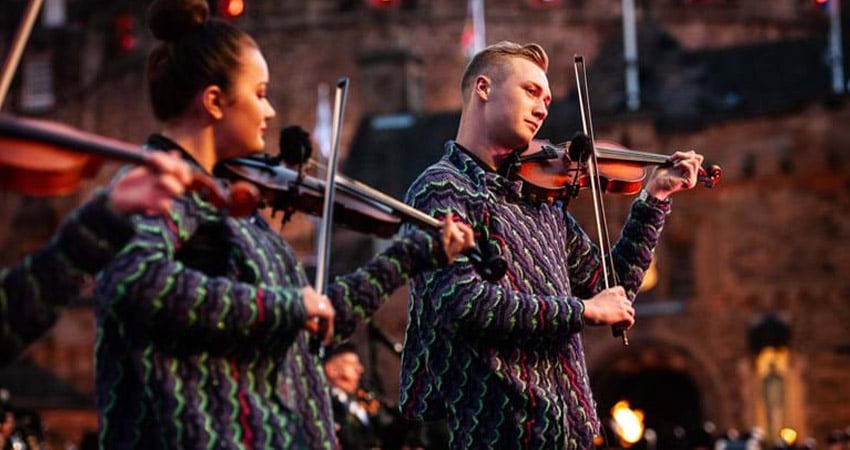 The Tattoo Fiddlers’ natural home is the Shetland Islands, and the absolute best are chosen to play with this group. Their goal is not only to entertain, but to keep the spirit, skill, and tradition of Scotland’s musical heritage alive. Margaret Robertson currently leads them, a native of Shetland, who has taught traditional fiddling for 40 years. Some of the players are third and fourth generation musicians. 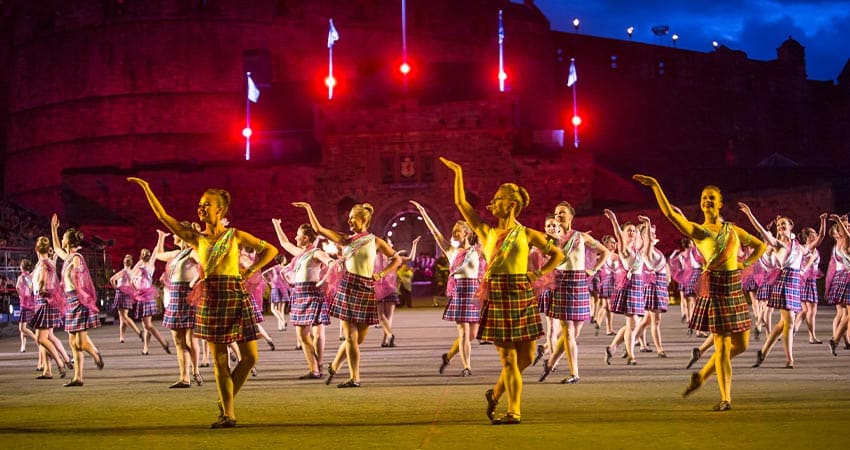 The dancers are some of the best Highland Dancers in Scotland. They are encouraged to be innovative and move their art form into the future, always pushing the envelope. Hundreds of dancers audition for vacant spots; to be included is a great honor. As with the musicians, dancers promote Scottish identity, and in any one year may perform in places as diverse as Prague, Oslo, and the Silk Road of Xi’an, China.

The Real Story Behind the Royal Edinburgh Military Tattoo 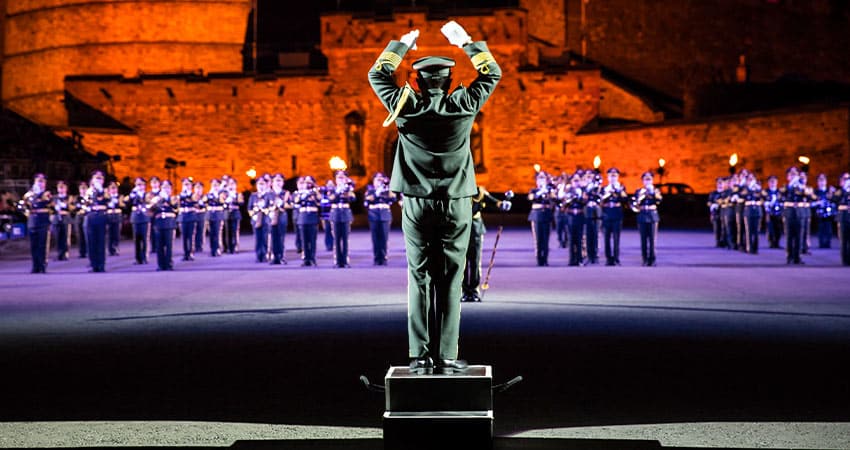 This began as a humble event, held just below Edinburgh Castle, in 1949. It was a salute to the Edinburgh Tattoo’s (the army’s) musical contributions. (When you visit Edinburgh, look for the original bandstand. It’s in Princes Street Gardens.) After that first modest show, Sir Andrew Murray, the Lord Provost of Edinburgh, invited the General Officer Commanding the Army in Scotland to present a military entertainment. He said it was to be called the Edinburgh Tattoo. There was already an International Festival in Edinburgh, and the Tattoo became part of it.

That first show, in 1950, gave twenty performances with an audience of over 100,000 people. The Queen Mother and Princess Margaret attended. The fireworks finale was born, and that tradition continues. The following year, 1951, the audience numbered 160,000. Word spread quickly, and the event was televised. Ten years later, in 1960, The Duke of Edinburgh attended. Soon it became the hot ticket for international celebrities. Getting into the spirit of joy and diversity, the band’s 1962 finale was Chubby Checker’s hit, Let’s Twist Again! 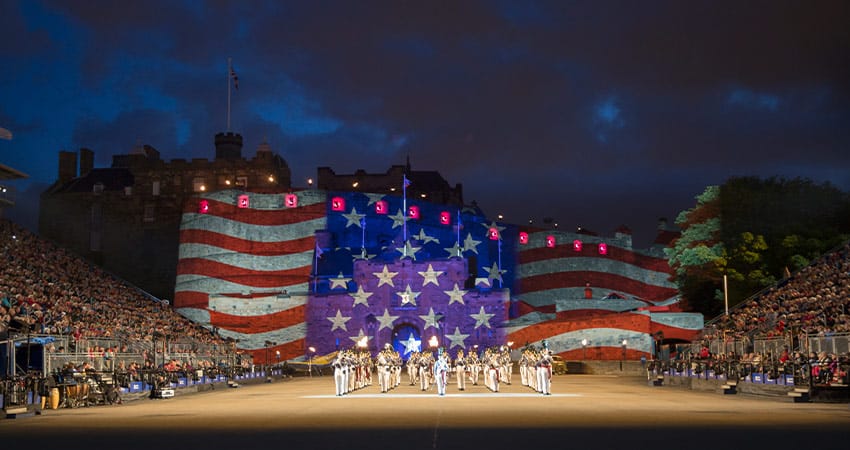 In 1976, the US Army performed for the first time with a precision bayonet drill. Now, imagine this: An eerie voice emanates from Edinburgh castle… Lieutenant Leslie Dow, OBE, became the voice of the castle. Each night he delivered verse, speaking as if he were the castle, about the troubles and triumphs it had witnessed over hundreds of years. New Tattoos were formed and joined in, including the Tasmania Tattoo, the Washington Tattoo, the Turkish Mehter Band, and The Royal Hong Kong Police Band. In 1990, the RAF Police Dog Demonstration became a long-standing favorite.

The Tattoo productions embraced drama. In 1993, the opening show was launched with the burning of a Viking Longboat. The following production celebrated the 500th anniversary of the first distilling of Scotch Whisky! The Egyptian Military Group from Cairo performed with the US military drill team. 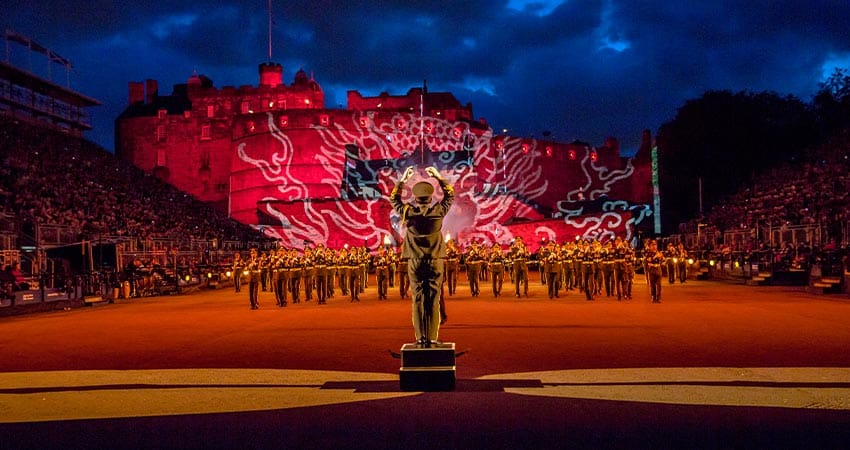 At the end of the 20th century, the Tattoo commemorated Robert Burns, South African Police Zulu drummers performed, the Golden Anniversary of the Queen and Prince Philip was celebrated with contemporary Highland dancers, and the Tobago and Trinidad Steel Orchestra and Drums played. Tickets were sold out and have every year since.

During Her Majesty’s Golden Jubilee, she attended the 2002 Tattoo. The 2004 Tattoo marked the 60th anniversary of D Day. Small stage performances were given at the Ross Bandstand in Princes Street Gardens. The Spirit of the Tattoo Visitor Center was opened on the Royal Mile with a rooftop café and a movie theater. Her Majesty the Queen then celebrated her 80th, Princess Anne became a Patron of the Tattoo, and Sean Connery attended. What a line-up! 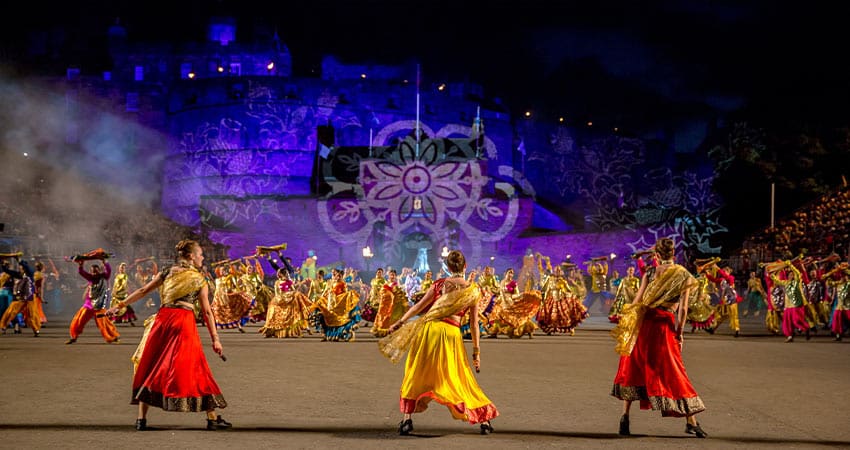 In 2018 the Royal Air Force (RAF) celebrated its 100th birthday at the Tattoo, with that year’s theme being “The Sky’s the Limit.” 2020 was the event’s Platinum Anniversary. For the first time in 70 years, the Tattoo was canceled in 2021 due to Covid, but it is back stronger than ever. Electro Pipes light up the Camera Obscura, blending traditional Scottish music with cutting-edge lighting and electronic music.

Edinburgh is the heart of Scotland. Visiting during the Tattoo is an unparalleled experience that will make your vacation an even richer experience. The Tattoo not only showcases the best of Scotland, it highlights the art and rhythm of other nations, creating an ever-growing, diverse community that welcomes all. This is the time to make plans for attending next year’s grand Tattoo!

When planning your vacation to Scotland, ask your Authentic Expert about including the Tattoo. They can make it happen!