Florence, Italy is often referred to as the Cradle of the Renaissance, representing the rebirth of the realms of art and science between the 14th and 17th centuries. The height of the city’s artistic development came in the 15th century, when the Medici, Florence’s prominent banking family, devoted an astronomical amount of funds into garnering the talents of the city’s architects, sculptors, painters and writers. Florence flourished as a center of influence for all of Italy, and thriving artists from all over flocked to the city. As a result, Florence today is a treasure trove of artistic and architectural gems, the masterpieces of defining artists of the Renaissance such as Michelangelo and Da Vinci displayed in internationally renowned museums and art galleries. These six pieces of Italian Renaissance art that record the vibrant history of the era cannot be missed by history buffs and art enthusiasts visiting the city of Florence. 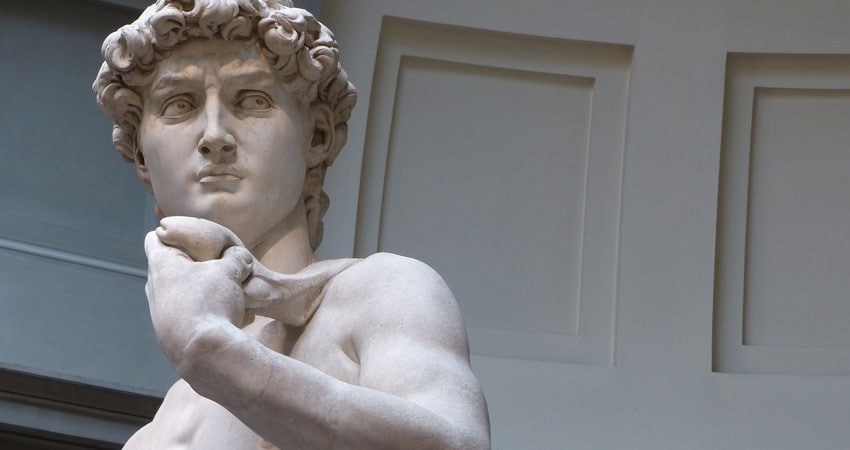 Where to See it: Galleria dell’Accademia

Crafted between the years of 1501 and 1504, Michelangelo’s Statue of David depicts the biblical hero of David before his battle with Goliath, as documented in 1 Samuel 17. David’s eyes exhibit intensity and his body stance display alertness and courage as he enters battle equipped with a sling over his left shoulder and a rock clutched in his right hand, against an armoured Goliath carrying a shield. The block of marble from which David was sculpted had been abandoned for 25 years by two artists prior to Michelangelo because of its imperfections, yet the sheer ingenuity of this Italian sculptor led to the creation of one of the masterpieces that defined the Renaissance.

Where to See it: Galleria dell’Accademia

Standing in company with the Statue of David at the Galleria dell’Accademia are Michelangelo’s The Slaves, a series of four incomplete marble statues dubbed, “The Awakening Slave,” “The Young Slave,” “The Bearded Slave,” and “The Atlas.” Two completed Slaves are showcased at the Louvre in Paris, France. The unfinished work of Michelangelo display his process of sculpting, and reveal that he strongly believed his role as a sculptor was to free the sculpture engulfed in the block of marble, in contrast to sketching guidelines on the marble and carving his artwork from the material. Incomplete at varying stages, art historians now believe that The Slaves were deliberately left that way to depict the different struggles of freeing oneself from being trapped in the material world. The strained muscles and powerful stance of the four different Slaves demonstrate the incredible strength needed to emerge into freedom. These marble sculptures display Michaelangelo’s love and understanding of human anatomy, which was advanced for its time. Art enthusiasts can appreciate that Michelangelo worked free hand, chiseling his marble without a single guideline. And despite being unfinished, The Slaves prove to be powerful pieces. 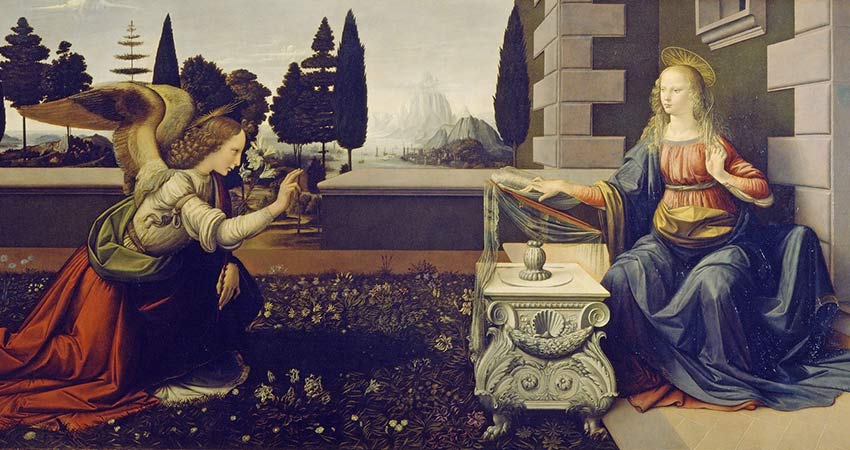 Where to See it: Uffizi Gallery

Leonardo da Vinci’s Annunciation, painted in 1472, captures a pivotal moment in Christianity, the moment in which Angel Gabriel descends upon Virgin Mary to announce that she will be carrying the Son of God, Jesus. Holding a lily, a symbol of virginity, the youthful angel Gabriel on the left of the painting is met with a look of shock by Virgin Mary on the right. Virgin Mary’s left hand raises in astonishment as she questions with whom she will have baby Jesus. The mountains and trees in the setting of this painting display da Vinci’s love of nature. A series of analyses suggest that da Vinci worked in collaboration with Andrea del Verrocchio to complete the Annunciation. Whether or not a follower of the faith, all spectators can appreciate da Vinci’s light brush strokes and elegance, as displayed on the wings of Angel Gabriel. 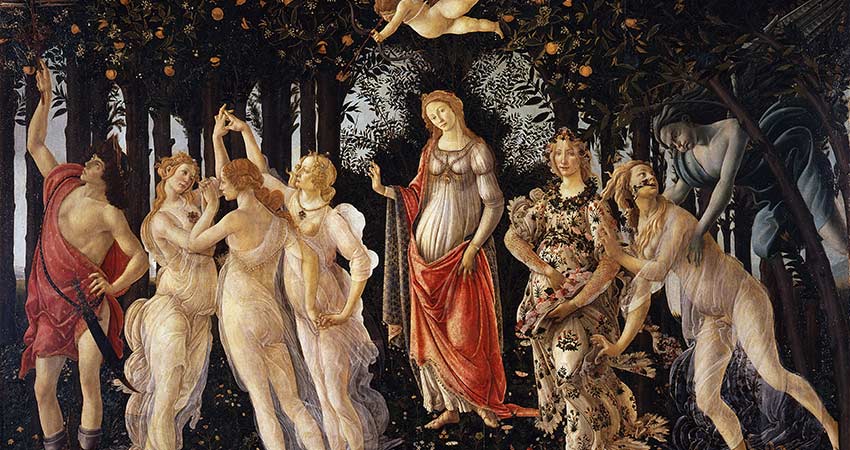 Where to See it: Uffizi Gallery

Also commonly referred to as Allegory of Spring, Sandro Botticelli’s painting of Primavera displays his skillful use of colour in this depiction of spring. Though the exact dates of this painting remain unclear, it is believed that this refined piece was created in the late 1470s or early 1480s, and was commissioned by a member of the Medici for a wedding. Botticelli elegantly features the Roman goddess Venus in the middle of the painting, framed by the arrival of Cupid above her, and accompanied by the dancing Three Graces to her left, who are symbols for love, chastity and beauty. The pearls that the Three Graces wear on their heads signify purity. Mercury is seen in the far left of the painting to be welcoming spring by dispersing clouds with his staff. To the right of Venus, Flora scatters flowers from her dress as a symbol of fertility. The arrival of spring is apparent in Primavera, as demonstrated by the blossoming flowers and fruit trees, which are a symbol of rebirth. Set in an orange grove, the Medici adopted the orange tree as a symbol for their family. Though the exact meaning behind Botticelli’s art displaying strong themes of love and fertility are highly contested, Primavera remains a famous Renaissance painting. 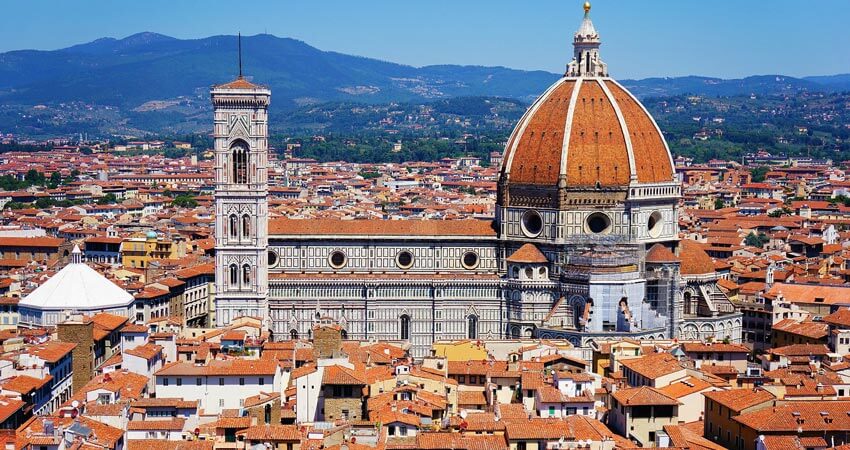 Where to See it: Florence Cathedral

Engineered by architectural genius Brunelleschi, construction of the dome began in 1420 when this Italian designer won a public competition held by the Opera del Duomo, beating out a number of top architects who traveled from all over the nation to compete in Florence. At the time of the competition, the city had erected the Florence Cathedral, and the proud Florentines needed an appropriate design to top off the structure. But given its incredible size, and challenges in constructing a dome after the cathedral had been built, nobody knew how to do it. Logically, the dome would have to be supported by scaffolding, but due to the cathedral’s dimensions, scaffolding wasn’t possible and Brunelleschi had to create a design that would support itself while it was being built. He created this octagonal shaped dome to be the biggest in the world, drawing inspiration from the shape of the Baptistry right across from the Florence Cathedral. A timeless work of art and designed with no sketches left behind, the complexity and wonder of the Dome still baffles spectators today. 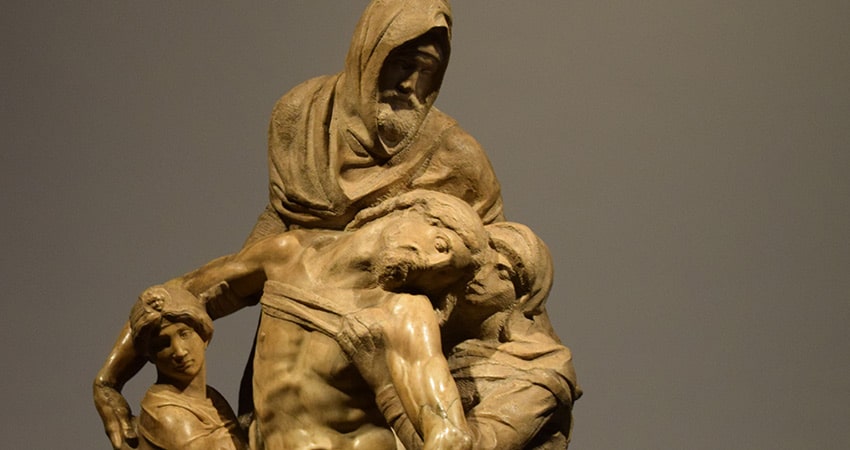 Where to See it: Museo dell’Opera del Duomo

The Deposition is one of Michelangelo’s final creations at the age of 72 in 1547. It presents the four prominent characters of Nicodemus, who bears the limp body of Jesus Christ immediately after his crucifixion, Virgin Mary and Mary Magdalene. Because this sculpture is housed in the Museo dell’Opera del Duomo, it has earned its title as the Florentine Pieta. Historians believe the Nicodemus depicted in The Deposition is actually an image of Michelangelo himself, and that this piece of work was sculpted for his own tomb. But after spotting a vein in the marble, Michelangelo smashed the sculpture in a fit of rage. The Deposition was found by sculptor Tiberio Calcagni, who restored the work to its current state, though Christ’s left leg remains missing.

Authentic Vacations is gearing up to provide you with a selection of Italian inspirational itineraries to add to the site.  In the interim, we can still provide you with an authentic Italian experience.  If you are ready to being your Italian journey, email us at vacations@authenticvacations.com or call us at 888-443-5259.