5 of the Most Photogenic Towns along the Italian Coast

Staggering cliffs, plunging ravines and pristine beaches are just a few of the traits that characterise the coastline Italy has been blessed with. The beguiling Italianate architecture of each of the nation’s coastal towns compete to be featured atop the rugged coastline’s towering cliffs, its densely packed peeling candy coloured buildings often tumbling down into cosy harbours and spilling into a placid sea of iridescent blues. Glimpses of castle ruins and crumbling stucco amid brightly coloured citrus plantations and expertly terraced vineyards are revealed with every switchback on this winding coastline. With each of Italy’s coastal towns boasting expansive seascape views and unique exploration options, selecting just a few to visit on holiday is a daunting task. Here, discover the five most photogenic towns along the Italian coast. 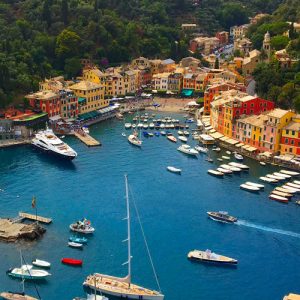 A playground for the rich and famous, Portofino, situated along the coast of Liguria, has been frequented by A-list celebrities since the 1950s.The town’s upscale boutiques, fashionable bars and fine restaurants are the definition of luxury. Isolated in geography by being situated on its very own peninsula, Portofino ups its exclusivity factor and exudes an air of arrogance. The town’s distinct crescent shaped harbour is dotted with rustic fishing boats and glamorous yachts, rendering this particular stretch of the Italian Riviera one of the ritziest. Celebrity spotting is a favourite pastime of visitors to Portofino, and those eager to catch a glimpse of the elite may just recognise them traipsing the town’s winding streets, concealing their identity behind a pair of oversized sunglasses and wide brimmed hat. For a rewarding climb, hike to the lookout atop Castello Brown, not to view the house museum’s displays, but for its sweeping panorama of the harbour below. An unmissable experience by all water enthusiasts, scuba dive 15 meters below the waters for an up close encounter and high five with the bronze statue of Jesus Christ.

Local Tip: Vacation in the villas of Portofino for a taste of the high life. But for a selection of budget friendly accommodation options, opt for nearby Santa Maria Ligure or Camogli as a home base. Alternatively, consider visiting Portofino on a day trip via rail from Genoa. 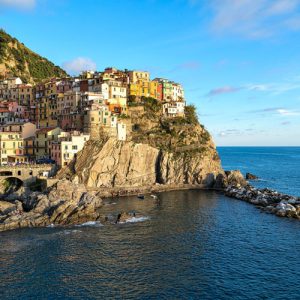 The Medieval fishing village of Riomaggiore is situated amid a series of dramatic cliff faces and rocky coves. Making up part of the Italian Riviera, this stretch of the Italian coast has undergone some major development since its discovery by travelers. Yet still, the Riviera manages to retain its vibrant character and draw in the crowds. Riomaggiore is the most easterly of five fishing communities as part of Cinque Terre, a region steeped in history and old world charm. Climb the village’s rocky outcrop for a postcard perfect snapshot of its multihued facades, seemingly stacked on top of each other as they scale the steep cliffside walls. Remain in the village to experience its gentler vibes as the warm glowing hues of sunset transform into the dark of the night.

Local Tip: Ride the Cinque Terre Express to access the region’s other four villages of Monterosso, Vernazza, Corniglia and Manarola.

Opt for the neighbouring towns of Levanto or La Spezia as homebase for a calmer and more authentic Italian experience. 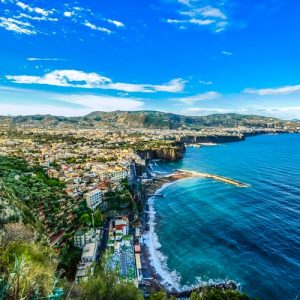 Even with the absence of soft golden beaches characteristic of Italy’s other coastal towns, Sorrento has established itself as a favourite seaside resort. Towering above the Bay of Naples and embracing the Sorrentine Peninsula is the Lattari Mountain range, boasting a series of hikes that offer dramatic views over the Bay. It’s the town’s extraordinary landscape of rocky peaks met seamlessly by the tranquil sea that compensate for the lack of sunbathing opportunities. Beyond Sorrento’s elegantly cafe lined Piazza Tasso, the town’s fashionable main square for people watching, are streets lined with little shops offering lacework and ceramics, which are famously produced here. Bordered by the rustic Italian countryside to the south, the Amalfi Coast to the east, and historic Pompeii to the north, the inspiring location of Sorrento is a springboard for a dozen other getaways.

Local Tip: Travel Sorrento in the springtime to witness the town painted in vivid colours of its jasmine and orange blossoms in full bloom.

Positano is an enclave of charming pastel hued abodes amid the Amalfi Coast. This portion of Italy’s winding coastline has claimed its fame as the nation’s most picturesque. This coastal town consists of one major thoroughfare, lined with chic boutiques, fine hotels and celebrated restaurants. Overrun by holidaymakers during the warm summer months, Positano can admittedly feel like a resort. But venture beyond the main road and into its colourful network of steep side streets and discover the charm of everyday life. A region esteemed for its hiking, embark on the Path of the Gods, a scenic cliffside trail that winds above Positano’s dazzling turquoise sea.

Local Tip: Opt to sunbathe on the more intimate pebbled Fornillo Beach instead of the town’s main Spiaggia Grande to escape the crowds.

Arriving by boat is perhaps the most magical way to witness Cagliari, the capital of the Mediterranean’s second largest island, Sardinia. Towering domes and energetic squares surround Cagliari’s most recognised feature, Il Castello, the town’s fortified hilltop citadel. A climb past it reveals a network of narrow cobblestone laneways, beckoning its visitors for an afternoon of exploration. The striking features of Cagliari’s historic center reveal its rich past, the remains of fortifications flanked by city walls and an amphitheatre allude to past Pisan and Roman rule. In the heat of summer, locals congregate in cafes along the town’s harbour and flock to Poetto Beach, which ultimately transforms into a hub for avid partygoers. Cagliari seemingly has it all- a smattering of historic sites, unobstructed panoramic viewpoints and sandy beaches, presenting its visitors with a well rounded experience.

The heat of June through August bring hoards of tourists who traverse the scenic towns along the Italian coast via rail or ferry, though local experiences present themselves to those who seek them.

The History of Italian Pizza and How the Locals Eat It