Ireland may be small, but it is mighty. It has given us the mysteries of Newgrange, the energy of Dublin, and a number of pretty fabulous movie stars. Of course, there is also Guinness, the stout described by James Joyce as “the wine of Ireland.” And how about that pot of gold at the end of a rainbow? The story may be grounded in a bit of truth. This St. Patrick’s Day, hoist a pint and regale your friends with some fun and wondrous Ireland trivia. 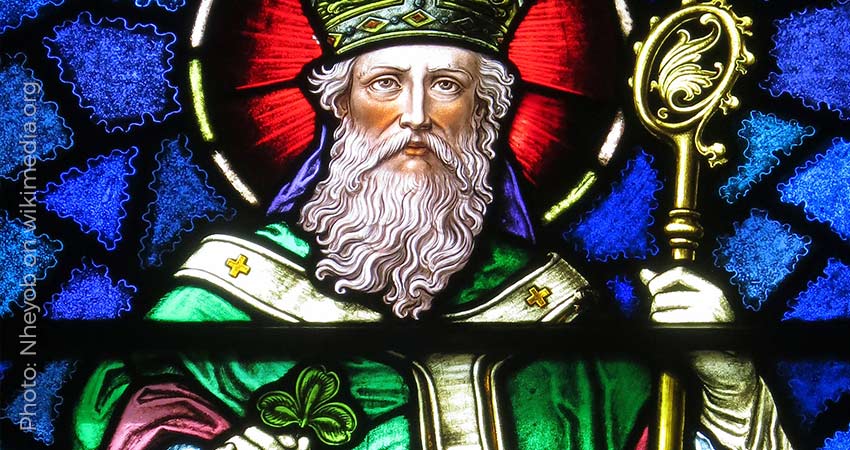 Patrick belonged to a prosperous Roman family living in Britain. Captured at age 16 by raiding Irish, he was taken as a slave. He escaped, then dreamed he should go back to Ireland and Christianize the population. It’s said he drove the snakes out of Ireland—this euphemism refers to the native religions and the Druids. Patrick himself wrote that he had raised 33 people from the dead and miraculously fed hungry sailors. By the 7th century, his life was the stuff of legends.

The color we most associate with him, green, came from Irish-Americans. The colors of the Irish flag are orange, white, and green, with green symbolizing Irish nationalism. As droves of Irish emigrants arrived in America in the 19th century, they wore green to celebrate St. Patrick’s feast day. His true color is called St. Patrick’s Blue, as seen in Dublin Castle.

The first St. Patrick’s Day parade was held in Boston in 1737. New York City created its own celebration in 1762. In 1962, Chicago began coloring its river green every March 17th. In Ireland the first parades were organized for the tourists, but now they happily join in with the spirit of fun every year. 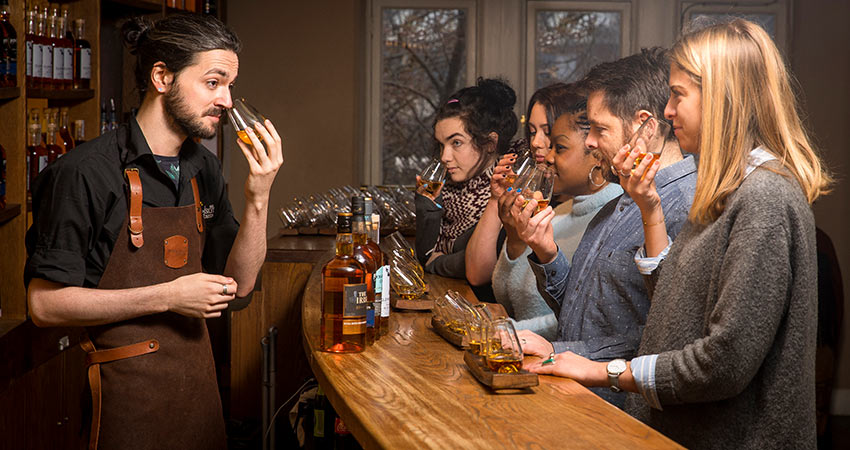 Irish writer Brendan Behan famously said, “I am a drinker with a writing problem.” (He’s not the only one…) Around the 12th century, Irish whiskey became one of the first distilled drinks in Europe. Monks learned to distill herbs from the French for perfumes, and the Irish used the same techniques for making whiskey. Go figure!

By 1556 the English had passed an Act against whiskey, making it illegal for anyone other than “lords, gentlemen, peers, and freemen of larger towns” to distill whiskey without a license. Beyond the Pale, an area of Ireland at the confluence of two rivers near Dublin, that rule was ignored, and distillation went on its merry way. 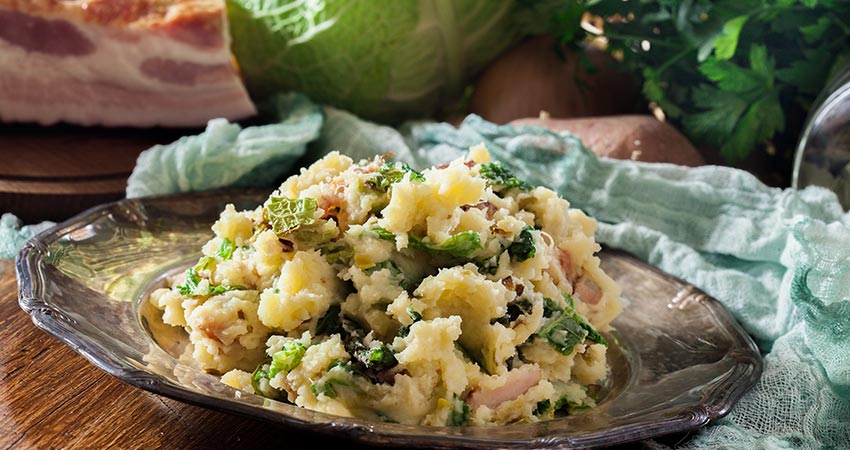 Loving the sound and rhythm of Irish speech, it’s not surprising that they have great names for foods and treats that make ours sound ordinary. Back Rashers sounds like a form of prickly heat that you just can’t scratch without a friend to reach it for you. In fact, it’s the Irish name for bacon, thick and generous.

You might want to follow up your rasher with a pear picking porky, a joker, or a polly pineapple. Why not? Lollipops are hard to beat. (And, if you’re a good kid at the doctor, they might give you a lolly after they fix your boo-boo with a plaster—which is a band-aid.)

French Fries are called chips, and potato chips are called crisps. Have them on the side of drisheen, a black pudding made from cow or pig blood that’s considered a delicacy. You might prefer your potatoes mashed and mixed with cabbage. If so, ask for colcannon. Crubeeens? That is boiled pigs’ feet. Most traditional Irish food was created to leave no waste. And what of the heavenly salmon? In Irish mythology it is associated with wisdom and knowledge. 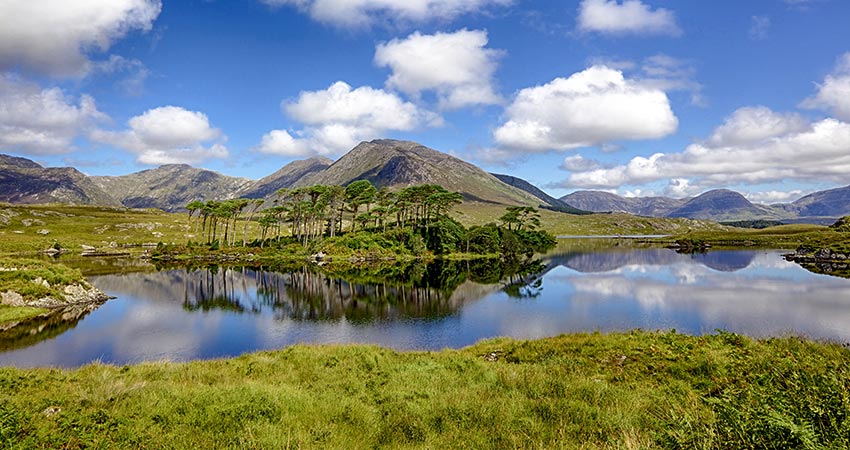 If you visited Ireland 9,000 years ago, you’d have been under a canopy, lush with willow, birch, and juniper trees. The country was a mass of endless trees, lakes, and rivers. Giant deer, ranging from 800-1,000 pounds, standing 6 feet at the shoulder, with antlers 12 feet across, roamed the low country.

The Neolithic people arrived in dugout canoes around 4000 BC from Europe. They raised cows, goats, sheep, and pigs to eat. Horses and donkeys were used to carry loads. They built large, permanent homes, and this gave them time to think about what they needed and turn their imaginings into reality. Their boats could bring them into the interior of Ireland, and a number of sites continued to exist through the Bronze Age.

Ireland has the oldest field system in the world—these early folks were excellent farmers. They had organized communities, deep spiritual beliefs, and worked to understand their world. 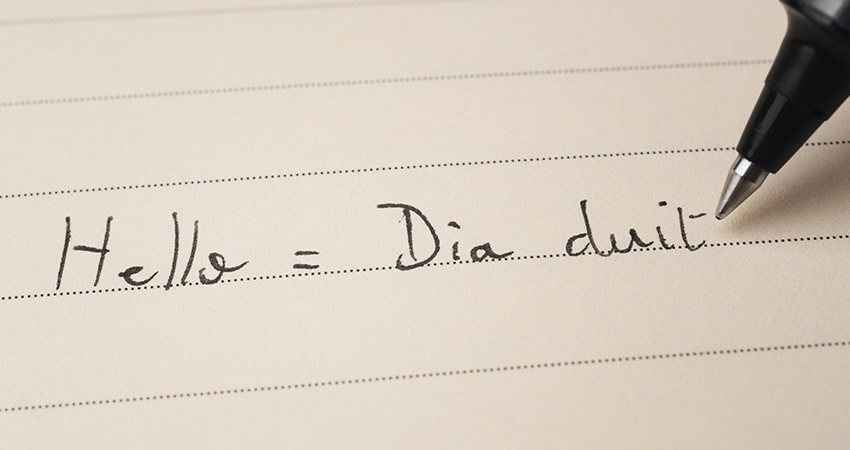 Beautifully enough, and once upon a time, letters were named after trees. In the order of the alphabet, a is for ailm (pine), b is for beith (birch), c is for coll (hazel), d is for dair (oak), and onward… In the beginning of the 20th century, and times previous, Irish was written using beautiful Gaelic script. 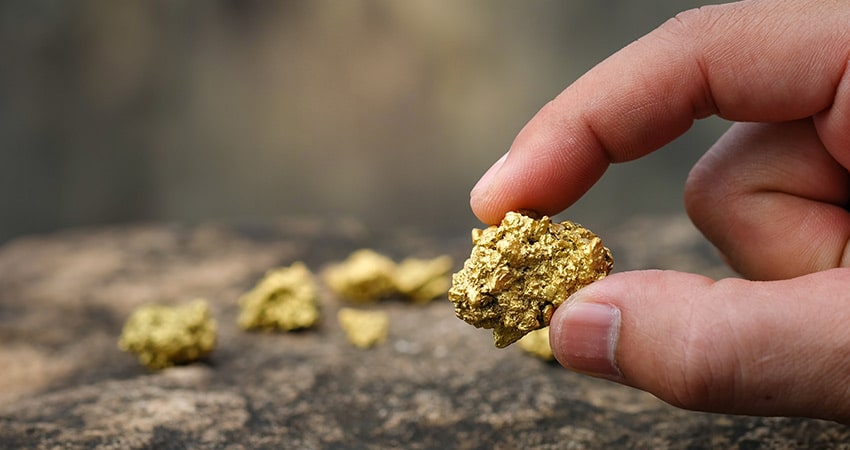 Irish craftspeople had a wealth of native gold, and more Bronze Age ornaments have been found in Ireland than any other country in Europe. Traders used gold to boost the Irish economy of that era, and gold jewelry has been found in Germany and Scandinavia.

Large gold collars, twisted gold rings, spiraled jewelry, earrings, sun disks, bracelets, items for rituals and burials, jewelry boxes, urns for cremated ashes, amulets, and even clothes fasteners were made of gold. When the Bronze Age ended, so did large work with gold. It is thought that the Irish gold mines had simply been spent.

It may be during this time the idea of gold being at the end of a rainbow cropped up. Rain and deforestation were changing Ireland’s climate and looking for a rainbow—the end of rain—was a lucky sign. 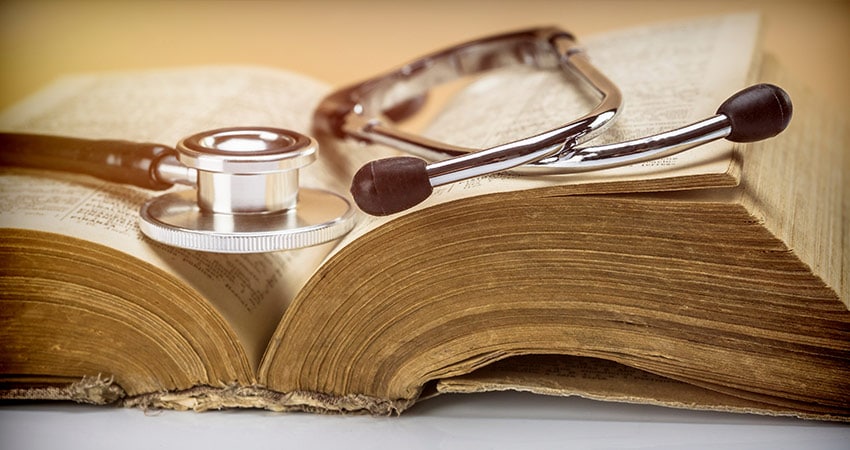 We don’t often think of Ireland as the home of great inventors, but it was, and it still is. John Joly, from the Irish Midlands, invented the first practical method of color photography in 1894. An engineer from Castlebar, Louis Brennan, invented the guided torpedo in 1877, and it was put into production ten years later. Francis Rynd, a doctor from Dublin, invented the first hypodermic syringe. He created it to give morphine to a desperately ill patient in 1844.

A stethoscope that goes in both ears was shown off at the Great Exhibition in London in 1851. Dr. Leared, from Wexford, was hailed a genius. This is still the stethoscope that docs wear around their necks today. One of Ireland’s greatest inventors was a priest, Reverend Callan, and he created the induction coil. He did conk out the future archbishop of Dublin during one of his experiments, but he rallied around. Callan’s invention is still used in car ignitions today.

Q, in the James Bond movies, did not invent the Ejector Seat. That honor goes to Sir James Martin. After blowing out the cockpit in 1946, the plane’s seat flew into the air, and the pilot parachuted safely to earth. It is believed this invention saved thousands of RAF lives. Holland, from County Clare, invented the submarine in 1878, and the US Navy bought their first subs from him.

Finally, although there are many more Irish inventors, Joseph “Spud” Murphy invented flavored potato chips. (Or crisps.) The founder of the company Tayto, he created a cheese and onion potato chip in 1954. We thank you, Spud Murphy!

This St. Patrick’s Day join in the high jinks, revelry, good companionship, music, and laughter. Raise a glass of whiskey or Guinness to all the great and wonderful things Ireland has given us, from the stethoscope to the onion potato chip! Curious about Ireland, view Ireland vacations here.