Traditional English food is full of contrasts. Many dishes are reminiscent of idyllic English summers, garden parties and afternoon tea on the lawn. Yet, others were thought up by the poor, who needed to make good use of any food available. Wherever you travel in the UK, don’t miss the opportunity to sample some, or all of these classics: 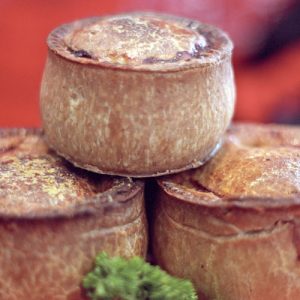 In the seventeenth century, pork pies were made with meat that needed preserving. Butter was poured into the hole in the top of the pastry, preventing air from getting in and stopping the meat inside from going bad. Historically, pork pies were the food of farm labourers, but they became popular with the aristocracy who began eating them on hunts. Today, one-third of the UK’s pork pies come from Melton Mowbray. There is some rivalry between the different pork pie locations, with the Lancashire Pork Pie Appreciation Society calling Melton Mowbray pies ‘insipid’.

How to eat it: with a pint of beer, with pickle or relish, with mushy peas and chips, while sitting on a horse.

The English version of blood pudding, black pudding is a delicacy made from boiled animal blood, fat, and oatmeal. Historically, black pudding was a food for the poor, although it also featured at banquets during the Tudor period. A handful of different locations in the UK are famous for black pudding. In Stornoway, black pudding has EU protected status. Chadwick’s Original Bury Black Pudding in Bury Market in Lancashire has been making and selling black pudding since 1856.

How to eat it: Black pudding is eaten as part of an English breakfast, but you will find it in restaurants too, mostly due to celebrity chefs Gordon Ramsay and Heston Blumenthal, who recently began using it in their cooking, and made it fashionable again.

In her journals, Queen Victoria mentions tea 7000 times and she enjoyed sponge cake with her afternoon tea so much that the cake was eventually named after her. A genuine Victoria sponge cake has a simple layer of raspberry jam, (cream was introduced later) and is dusted on top with caster sugar.

How to eat it: At afternoon tea, of course. If you want the luxury experience (and can afford it), try booking at Claridge’s or the Ritz. Or, visit one of the many Victorian tea shops around the UK where you can have the same experience for a fraction of the price. 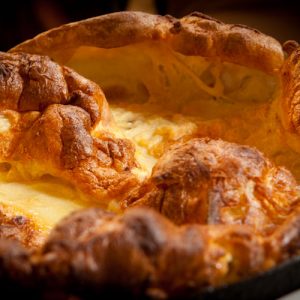 Nowadays Yorkshire pudding comes with a roast dinner but historically it was served as a starter with gravy. The idea was that by the second course you would be so full that you would eat less meat (which was expensive). Yorkshire pudding batter was held underneath the meat joint while it was roasting, so the meat juices would mix with the batter. Once cooked, it was sliced up into portions. Any leftovers were eaten with jam or fruit the next day.

How to eat it: It is almost compulsory to have Yorkshire pudding with your Sunday roast, but for something a bit different, try a Yorkshire Pudding Wrap, like these from Yorkshire Burrito (https://yorkshireburrito.com).

Considered deeply unfashionable by the young and hip, trifle is a quintessentially English dessert made with fruit, sponge, whipped cream and custard. It is traditionally served in a large decorative glass bowl. The earliest trifle recipe dates from 1585 when it was a much simpler dish, made with cream, rosewater, and sugar. During the 18th century biscuits or sponge and alcohol were added. There are hundreds of varieties of trifle today and it is a dish that is often brought out with a flourish at Christmas.

How to eat it: While complementing the chef on the recipe

A Cornish pasty is a pastry filled with meat and vegetables and baked in the oven. In the 13th century, pasties were consumed by the wealthy, filled with venison or other game. In the 17th century, they became popular with Cornish tin miners as they could be eaten as a snack mid-morning down the mine. These days, the status of Cornish pasties is protected by the European Commission, and millions are sold every year.

How to eat it: wrapped in paper, with your fingers, after a long walk along the Cornish coastline

Lancashire hotpot is a tasty dish made with mutton or lamb, onions and layers of sliced potatoes. Arguably the signature dish of Lancashire, it is thought to originate in pre-industrial times. Cottage workers would leave a large earthenware pot containing the stew on the fire all day, keeping an eye on it while working. Today, it is a well-loved dish that you can find on the menu in any decent Lancashire pub.

How to eat it: with pickled red cabbage or beetroot, sitting next to a roaring fire

Jam Roly Poly pudding is a suet pudding spread with jam, rolled up and then boiled or steamed in muslin. Once an English staple, it is considered highly unfashionable today. The oldest recorded Jam Roly Poly recipe is dated 1845. Historically, it was steamed using an old shirt sleeve, giving it the gruesome nickname ‘dead man’s arm.’

How to eat it: with custard, for the full effect.

When you’re ready to take that England vacation and you want o live and experience the English culture and countryside the way the locals do, then book with Authentic Vacations.  We can wrap experiences that revolve around the cuisine and where best to partake in these delectable authentic English dishes.

7 Things to do Without Shakespeare in the Mix